Pilot and Passenger were rescued after their aircraft: A pilot and passenger who were stuck in a small plane for nearly seven hours after it crashed Sunday into power lines in Montgomery County, Maryland, have been rescued, Montgomery County Fire and Rescue Service Chief Scott Goldstein said early Monday morning.

According to Goldstein, both were taken to the hospital with serious injuries, including orthopaedic and trauma injuries from the crash as well as hypothermia. According to Pete Piringer, chief spokesperson for Montgomery County (MD) Fire & Rescue Service, the rescue began at 5:30 p.m. when crews responded to reports of a small aeroplane flying into power lines.

When officers arrived on the scene, they discovered a small plane suspended about 100 feet in the air after colliding with the tower. Maryland State Police identified the pilot as Patrick Merkle, 65, of Washington, DC. Jan Williams, 66, of Louisiana, was the passenger, according to a state police news release.

The fire department was in communication with the pilot and passenger during the rescue and nearby roads were closed, according to officials. The crash scene is about four miles northwest of the Montgomery County Airpark, state police said. Rescuers had to wait for the tower to be “grounded or bonded” before they could reach the passengers, Goldstein said at a press conference on Sunday evening.

According to the chief, this entailed crews ascending to place clamps or cables on the wires to ensure there was no static electricity or residual power. He also stated that the aeroplane needed to be secured to the tower structure. He added that the area’s foggy weather conditions complicated matters by reducing visibility.

At 11:30 p.m., a utility contractor finished grounding power lines near the plane, and the contractor assisted rescue crews in securing the plane within the next 45 minutes, according to Goldstein. 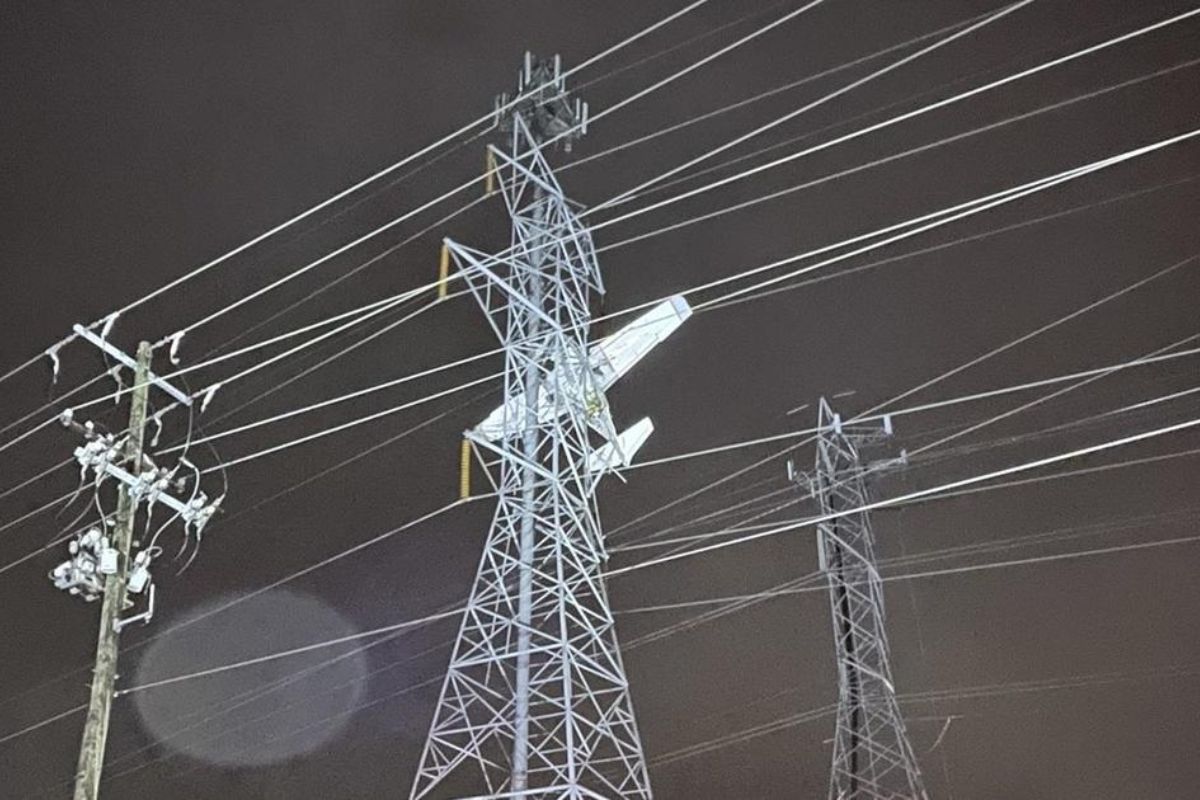 According to Goldstein, the first person was removed from the plane at 12:25 a.m., and the second person was removed about 10 minutes later. Goldstein stated that the department checked in with the plane’s occupants on a regular basis during the rescue and limited their cell phone use to conserve batteries. Crews will be on the scene all night to remove the plane and repair and reconnect damaged power lines.

“We have confirmed that a private plane collided with Pepco’s transmission lines in Montgomery County,” Pepco said in a tweet. “We’re assessing the damage and collaborating with Montgomery County fire and emergency services.”

Schools in Montgomery County will be closed Monday due to the widespread power outages, district officials said Sunday night. The district earlier said that more than 40 schools in the Montgomery County Public Schools system and six central offices were without power, affecting services such as maintenance, buses, and food service.

According to the FAA, the plane is a single-engine Mooney that took off from Westchester County Airport in New York. The agency, in collaboration with the National Transportation Safety Board, will investigate the incident. William Smouse, who lives about a mile away from the crash site, told CNN affiliate WJLA on Sunday evening that he was leaving for dinner with his son when he noticed “two big flashes” and then multiple fire engines driving by. Smouse described the incident as “pretty scary,” adding that his house is in an area where planes and jets frequently pass through. “I think about it a lot, where they come in, and, literally, they are like 200 or 300 feet over us,” he said.