On Sunday night, the first-ever Forbidden Door event took place in Chicago, Illinois. It brought together wrestlers from All Elite Wrestling and New Japan Pro Wrestling. Some of the best professional wrestlers in the world got together at the United Center for an event that was billed as a pay-per-view like no other. It’s safe to say that the Forbidden Door was violently kicked down, and most expectations were surpassed. During the event, it was easy to tell that Forbidden Door was a huge success just by looking at Twitter or listening to the crowd.

Fans had a great time watching almost every match on the card. Pro wrestling was on display, and it was good. There were, of course, some highlights in and between the matches that will probably stay with wrestling fans for a long time.

In no particular order at all, here are the seven biggest (and most memorable) moments of AEW Forbidden Door.

Eddie Kingston can chop better than most guys in AEW. Even so, few people can do it as well as he can. The same is true for NJPW’s Minoru Suzuki. Both of these guys love to talk trash, and their fans can’t get enough of how great they are in the ring. We knew they would fight at some point because they were in a tag-team match at Forbidden Door, but the fight was even better than we thought it would be.

Dax Harwood has become one of the most popular wrestlers in AEW, so it hurt to see him get kicked out of the ROH and IWGP Tag Team Championship match. In the middle of the match, doctors helped Dax up the ramp and out of sight after he hurt his shoulder.
We don’t know how bad Harwood’s injury was or if it was always part of the plan, but it was a beautiful thing to see him run back into the ring later in the match to finish the job. Even though his shoulder was bandaged, he still helped his best friend and partner Cash Wheeler get FTR their seventh star. 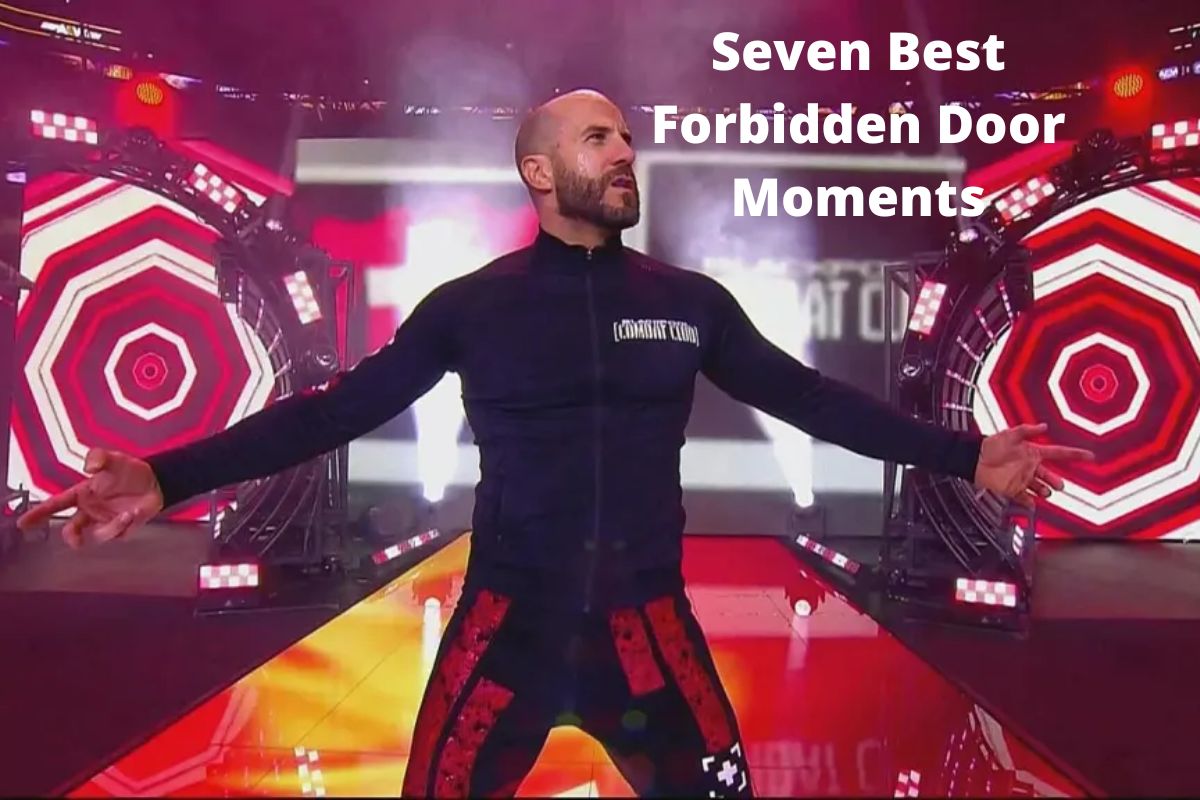 Last week, Bryan Danielson said that he was hurt and couldn’t fight in Forbidden Door and Blood and Guts. He said that a new member of the Blackpool Combat Club would be making his debut in his place. Almost every wrestling fan in the world thought that Claudio Castagnoli would be the wrestler in question (fka Cesaro).
It was, in fact, Claudio who walked into the ring to face Zack Sabre Jr., but that didn’t make the debut any less exciting. In just a few minutes, Claudio showed everyone what they’d been missing by not seeing him wrestle, and we’re already counting down the days until Blood and Guts see him again.

Orange Cassidy, Will Ospreay, and Shibata

This list has more “moments” than full matches, but the match between Orange Cassidy and Will Ospreay has so many great moments that you could make a whole list of them. After being hurt, OC has come back stronger than ever, and Ospreay keeps showing why he’s one of the best in the world. Orange Cassidy did a great job of playing opossum. Ospreay reached for OC’s pocket. Both of them killed each other. To put it simply, this was a great match.
After the final bell, Ospreay and his United Empire posse attacked Orange Cassidy, just when it seemed like things had reached their highest point. When Katsuyori Shibata saved Cassidy, the roof of the United Center was about to come off. One of the biggest Japanese wrestling stars of the last decade kicked some ass in front of a rowdy crowd in Chicago, and it was by far the best surprise of the night.

The cherry on top was seeing Orange Cassidy pass his shades over the Shibata and give the most mellow thumbs-up he could muster.

Sting doesn’t fight as often as he used to, which is to be expected for a 63-year-old icon, but when he does, he still brings the house down. The fight was cool, but even cooler was how he came in. The first time Sting’s music played, he didn’t come out of the tunnel. But when the Bullet Club got there, the lights went out and a spotlight seemed to show Sting up in the rafters. The lights went out again, and Sting’s shadow showed up on top of the tunnel. He jumped off the structure to attack Bullet Club to start the match, and that was just the first of many great things Sting did during the match.

At Forbidden Door, AEW showed off a brand-new title belt called the All-Atlantic Championship. Malakai Black or Miro seemed like they would be the first All-Atlantic Champion for a long time, but PAC surprised everyone and won the belt. It was a very intense match, and it was nice to see one of the best athletes finally get some hardware to hold over his head.

It’s too bad that CM Punk got hurt at the beginning of his first reign as AEW World Champion. Straightforward. But Jon Moxley is one of the best people to stay in his place until he comes back. His main event with Tanahashi was one of the best matches of the night, and the Wild Thing’s face was covered in blood by the end. Moxley will have some great matches over the next few months as he defends the interim AEW title, and the possibility of a unification match with CM Punk is exciting.

Till Then, Keep Yourself Updated With All the Latest News From Our Website Journalworldwide and Get All Recent Updates.
Share FacebookTwitterGoogle+ReddItWhatsAppPinterestEmail

Phillies Beat the Padres 8-5 Despite the Absence of Bryce Harper!

Dota Dragon’s Blood Season 3: Is It Officially Confirmed or…