On Friday, in Albuquerque, bronze statues of the fictional meth cook Walter White and Jesse Pinkman were put up at a convention center to honor the “Breaking Bad” TV show and its entertainment legacy. The statues were met with applause in a city that played its gritty supporting role.

The show “Breaking Bad,” which ran from 2008 to 2013, and its prequel, “Better Call Saul,” which is still going on, helped start a filmmaking boom in New Mexico. They also showed how drug abuse and crime were real problems in Albuquerque.

Kentucky Floods Kill at Least 19 People, and the Governor Warns That the Death Toll Will Be “Far Higher”

Gilligan said he recognized that the statues of “two fictional, infamous meth dealers” won’t be universally cherished in New Mexico.

“Seriously, some people will say, ‘Wow, just what our city needed,'” he said. “I understand that,” Gillian said. “I see two of the best actors that the United States has ever made. I see them as two tragic figures that are bigger than life and serve as warnings.”

AMC’s “Breaking Bad” is still a mainstay on Netflix. It tells the story of a high school science teacher (played by Cranston) and a former student (played by Paul) who work together to make and sell meth amid violent, cliffhanger-style plot twists. 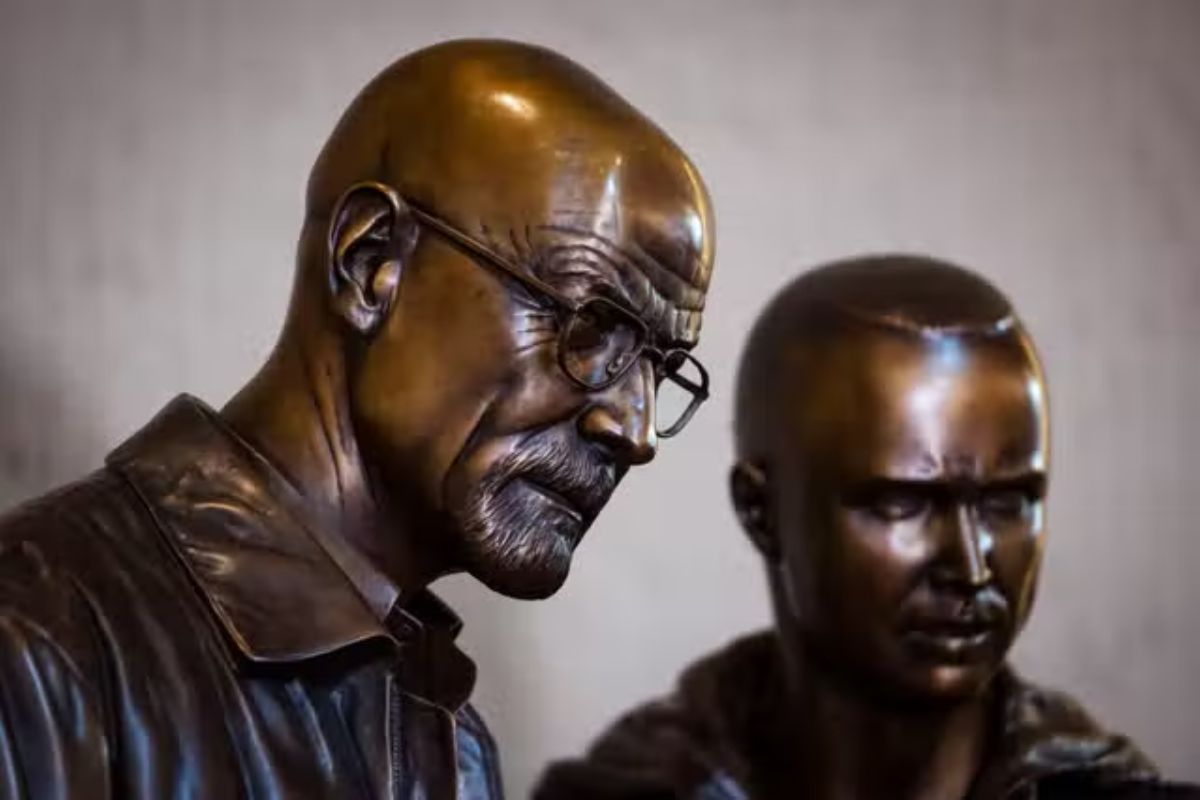 The show and its main characters are already celebrated on T-shirts and in airports. In Albuquerque, tour guides take fans to former filming locations in a replica of the RV that was used as a meth lab on the show.

New Mexico has been fighting addiction for a long time. In the last 30 years, more than 43,000 people have died from drinking too much or taking too many drugs. Albuquerque is also dealing with a record number of murders right now.

Keller talked about how “Breaking Bad” and “Better Call Saul” has helped Albuquerque’s economy. He joked that the shows bring money and happiness to a city he called “Tamale-wood.”

“While the stories might be fictional … jobs are real every single day,” Keller said. “The city is also a character. … We see ourselves in so many ways, good and bad.”

Rep. Rod Montoya, a Republican from Farmington, said that he likes Cranston as an actor, but that the statues attract the wrong kind of attention.

“I’m glad the job went to New Mexico, but really?” Montoya said. “Are we going to praise people who make meth?”

He also asked why the tribute was still there after Albuquerque took down a statue of the Spanish conqueror Juan de Onate in June 2020.

Demonstrators tried to knock over that bronze sculpture to protest how cruelly Rate treated Native Americans about 500 years ago. At the protest, there was a fight that led to gunfire that hurt one man.

Politicians in New Mexico, like Gov. Michelle Lujan Grisham, are counting on the film industry to bring more jobs to the state, which has the highest unemployment rate in the country.

The film and TV industry in New Mexico recently hit a new production peak. For the fiscal year that ended in June, $855 million was spent in the state, which was a record. “Stranger Things,” a Netflix show, is one recent video project that was shot in the state.

New Mexico gives back between 25% and 35% of the money spent on video production in the state. This helps both big and small filmmakers pay for their work. In 2019, incentive payments reached a peak of $148 million.

Kentucky Floods Kill at Least 19 People, and the Governor Warns That the Death Toll Will Be “Far Higher”

Homeland Security Watchdog Stopped the Effort to Get the Text!