Dems’ Tax and Environment Agenda to consume Congress in July!

Democrats are taking tangible steps towards a deal on their party’s signature spending bill, expecting the proposal to dominate the rest of July and hoping it could reshape their political fortunes after six months of stasis.

Majority Leader Chuck Schumer and Sen. Joe Manchin (D-W.Va.) are making progress in their talks about a possible package that would deal with the environment, taxes, and prescription drugs. A person who knows about the talks says that Schumer recently told Senate Democrats that if he can reach a deal with Manchin, the bill could be brought to the floor as soon as this month.

Key details are still being worked out, but Democrats are giving signs that they will start making their case to the Senate rules chief as early as next week about why the package should pass with a simple majority in the chamber. No one is getting too excited in a party that is still hurting from Manchin’s rejection of the Democrats’ previous version of the bill, Build Back Better.

Democrats interviewed for this story ranged from near-certain there will be a deal to fretful that anything will ever materialize.

“I am generally optimistic. I’ll believe it when there’s a deal,” said Sen. Chris Coons (D-Del.) on Thursday. “I believe there is positive momentum, I believe there have been constructive conversations. But the specifics, the details, I think it’s best to let that work itself out.”

This week, Democrats finished the easiest part of their puzzle: they finalized a deal from last year to change the prices of prescription drugs. This deal lowers prices and is expected to bring in at least $250 billion in revenue. Democrats sent that piece to the Senate parliamentarian for review to make sure it doesn’t break the strict rules of the chamber that govern whether or not a bill can pass with a simple majority. This is called “budget reconciliation.”

They also plan to send in soon another part of a deal that will keep Medicare solvent for longer. All 50 Democrats in the Senate are likely to agree with these two pieces.

Shaving down the $555 billion energy package from the abandoned Build Back Better bill is proving tougher; Manchin is looking at energy spending of around $300 billion and ultimately new subsidies for electric vehicles could be cut, according to a second person familiar with the negotiations. Democrats are also trying to prevent health care premiums from skyrocketing this fall, and they need to detail tax increases and enforcement that would both pay for the bill and reduce the deficit, priorities of Manchin’s. 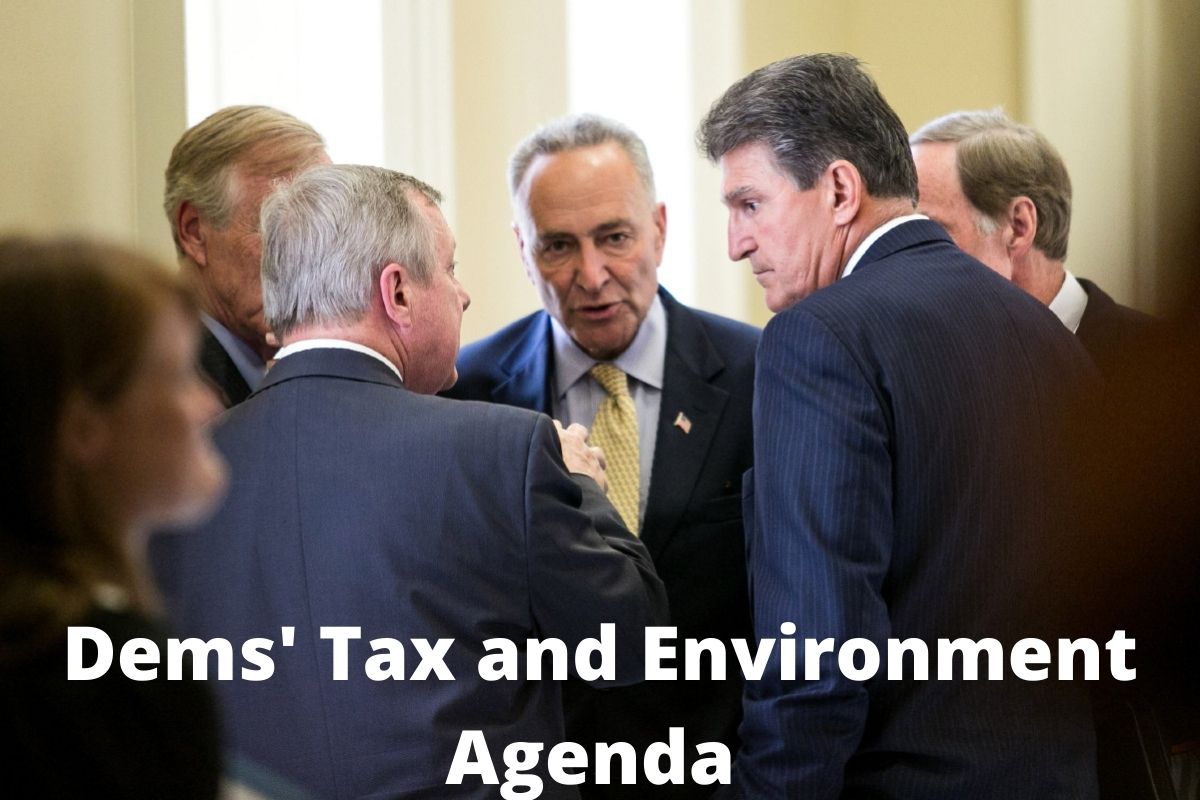 Manchin and Schumer are working on a bill that would bring in about $1 trillion in new money. Half of this money would go toward reducing the deficit, and the other half would go toward spending on energy and health. At the moment, such a deal is just an idea. The tax and energy pieces are still in a lot of flux.

“Senator Manchin has repeatedly expressed his concerns about rising inflation, a pending recession, and the state of American energy security. He continues to work in good faith to see if there is a pathway forward to shore up domestic energy production and reduce emissions, lower health care costs for seniors and working families, and ensure everyone is paying their fair share of taxes,” said Sam Runyon, a spokeswoman for Manchin.

Schumer wouldn’t say anything about the negotiations, but he recently said that he and Manchin “continue to have very good and productive talks.” Both men are being secretive about their talks because of their up-and-down pasts. Last July, Manchin, and Schumer made a secret reconciliation agreement. In December, Manchin voted against President Joe Biden’s Build Back Better bill. This year, both Biden and Schumer tried to weaken the legislative filibuster, which Manchin opposed.

Democrats have a chance of keeping control of the Senate, but they are having trouble with Joe Biden’s unpopularity and public anger over rising prices. This is where Schumer and Manchin’s talks come in. Due to Manchin’s narrower goals, other parts of the Democrats’ agenda, like tax credits for children, education, and helping seniors stay in their homes, are almost certain to be put on hold.

Another possible casualty moving forward, according to multiple sources, are more federal subsidies for electric vehicles and new infrastructure spending to support them. Manchin has publicly panned over-reliance on electric vehicles as “stupid” when other countries control much of the supply chain for critical parts and consistently questioned more federal investment for the growing industry. Separately, car companies are asking for Washington to lift a cap on how many electric automobiles are eligible for existing tax credits.

Manchin is also interested in advancing more domestic energy talks outside of the current negotiations, having held bipartisan discussions with the GOP earlier this year.

“It’s no secret that Sen. Manchin and a lot of other people on both sides of the aisle think that reforming the way we get permits is important for the energy security of the United States and our ability to reduce carbon emissions,” Runyon said. He also said that Manchin will “look at all options to deal with these issues responsibly.”

Manchin previously signaled he would not support Direct Pay, which essentially gives cash to clean energy developers to free companies from having to rely on tax credits. Some Democrats and interest groups are making a late push with Manchin to include direct pay tax credits for clean manufacturers, adding those incentives would be technology-neutral. Democrats are also discussing barring large power companies from the Direct Pay program and focusing on nonprofits.

To hit his rough goal of $500 billion in new spending while also incorporating extensions for expiring Obamacare subsidies that could cost roughly $200 billion, more energy spending may also be jettisoned.

The tax policy is also not yet done. A person with direct knowledge of the negotiations says that Democrats haven’t decided which tax hikes on corporations and the wealthy will be used, and that international tax policy is still in flux.

Democrats have to hurry to finish the package because they have to meet two deadlines soon. Even though the Obamacare subsidies are supposed to end at the end of the year, insurance companies are locking in rate hikes for the summer and fall. The most likely time limit for stopping those rate hikes is sometime in August. Also, Senate rules say that Democrats only have until the end of September to pass a party-line bill. If they don’t, they have to go back to the beginning.

And there’s no margin for error. Senate Democrats need all 50 of their members’ support in the evenly divided Senate, and that means yes votes from Manchin and Sen. Kyrsten Sinema (D-Ariz.), plus a return from Sen. Patrick Leahy (D-Vt.), who is recovering from a broken hip. Coons said he’s “communicated” with Leahy and is “encouraged by his progress.” Leahy’s office hasn’t yet indicated when he’ll return to the Senate, though he was discharged from the hospital this week.

Some Democrats are worried that Sinema isn’t part of the talks between Manchin and Schumer because she has a different view of tax policy than her colleague from West Virginia, who wants to undo the Trump tax cuts more than she does. A Democratic staff member said that Sinema stays in touch with the Democratic leadership.

Hannah Hurley, a spokesperson for Sinema, highlighted the Arizona Democrat’s previous statements supporting the $1-trillion plus in revenue options the White House has presented as part of its proposed framework last fall for Build Back Better.

As the party-line bill moves forward, it could also hurt a separate bill that both parties agree on about competition. Senate Minority Leader Mitch McConnell says he will stop talking about the bill if Democrats keep pushing for their party-line bill. The bill had $52 billion for making microchips. So far, Democrats aren’t giving up, in part because there’s no deal on that bill yet.

Sunny Balwani, a Former Theranos Executive, Was Convicted on 12 Counts of Fraud!