In May, U.S. employers were still eager to hire, which fueled a red-hot job market that is still keeping recession fears at bay.

Employers posted 11.3 million job openings in that month, down from a peak of 11.8 million in March and 11.4 million in April but still well above pre-pandemic levels, according to a report released Wednesday by the Bureau of Labor Statistics.

Roughly 4.3million Americans quit or changed jobs in May, reflecting a job market where workers continue to have the upper hand. Overall hiring, meanwhile, slowed slightly, with businesses adding 6.5million workers in May, compared with 6.6 million a month earlier. Layoffs, meanwhile, remained near record lows.

“This is not what a recession looks like,” said Nick Bunker, an economist at the jobs site Indeed. “Demand for workers might be stagnating, but it’s still at very elevated levels. The labor market is not signaling a recession.”

Even though the economy is getting worse, hiring is still going well. Gas, groceries, and other goods are more expensive than they were 40 years ago because of inflation. The way people feel is at an all-time low. And more economists and people who make predictions think that there will be a recession in the next year.

Fears like these have scared investors and hurt the financial markets. Oil prices fell as much as 10% on Tuesday, and for the first time since May, U.S. crude prices went below $100 per barrel. The stock market, on the other hand, kept falling after having its worst first half of the year since 1970. This happened before the July Fourth holiday. After the jobs report came out Wednesday morning, the markets went down, but they went back up later in the day. 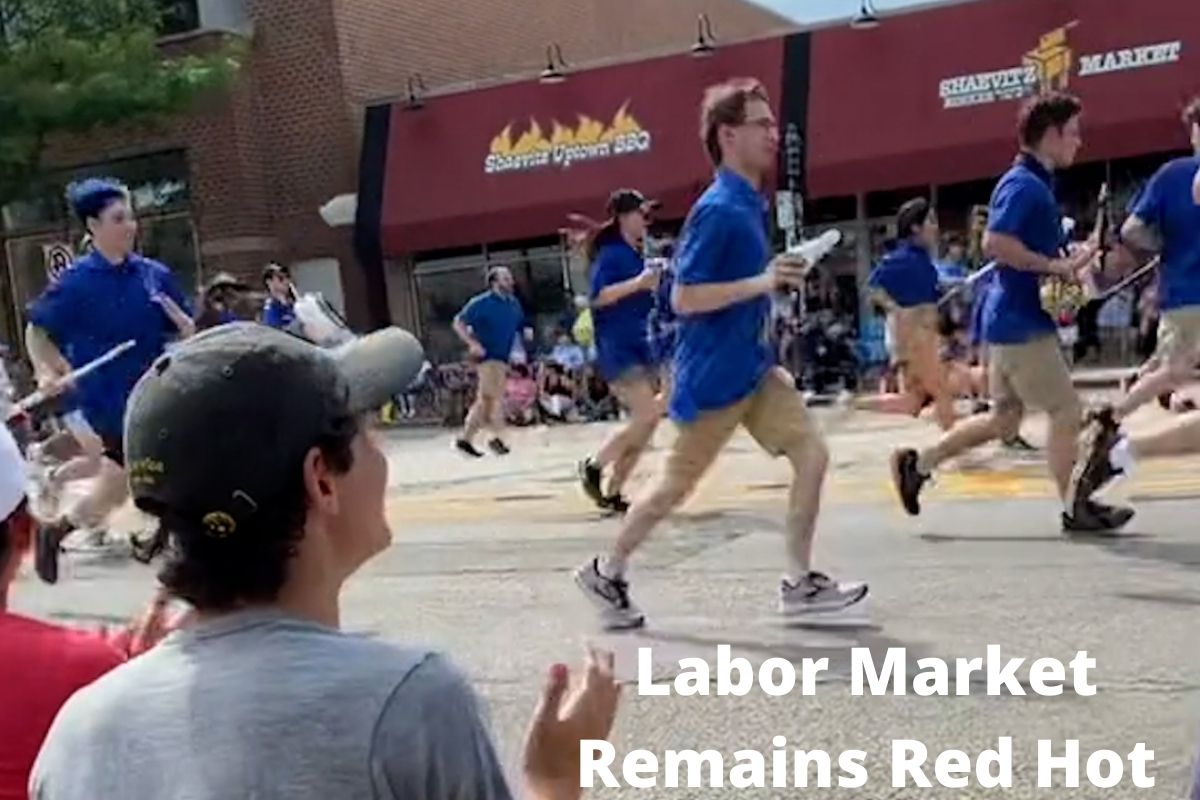 The strong labor market and low unemployment rate — at a pandemic low of 3.6 percent — have remained a source of optimism for economists and policymakers. Federal Reserve Chair Jerome H. Powell has routinely cited “extremely, historically” tight labor conditions as a key reason he feels comfortable hiking interest rates to cool the economy. The hope is that the Fed can tamp down on inflation without sending unemployment soaring.

Fed officials say they expect the job market to remain strong but worry that risks to the economy are rising, according to details from the central bank’s June meeting that were released Wednesday afternoon.

The next big test comes Friday morning, when the Labor Department reports June employment figures. Although labor market growth is widely expected to moderate, a marked decline is unlikely.

“We’re hearing a lot about a looming economic slowdown, but someone forgot to tell the job market,” Bledi Taska, chief economist at Lightcast, a labor market data and analytics firm, said in an email. “Even if the economy settles from the pandemic shock waves, and slips into a recessionary period, the U.S. will still likely have around 7 million job openings.”

The rapid rebound comes after more than 20 million people lost their jobs in the first months of the pandemic. Since then, U.S. employers have tried to hire back many of those workers by offering higher wages and more flexible schedules. Some of the biggest hiring gains in recent months have been in professional and business services; leisure and hospitality; and trade, transportation and utilities.

The Labor Department says that this trend continued in May, when each of these industries hired at least 1 million more people. But there were more layoffs in some places, like wholesale trade and the federal government.

“Of course not all industries are doing the same thing,” said Julia Pollak, a labor economist at ZipRecruiter. “But we’re not seeing a general cooling in the job market when it comes to demand for workers.”

In Galveston, Tex., James Gonzalez says he’s all but given up on trying to find qualified truck drivers. For several months now, he’s been the lone driver at his company, Gonzalez Trucking, where employees typically make about $25 an hour.

“It’s so hard to find people — especially someone who knows what they’re doing,” he said. “I’ve been doing this for 20 years and can’t think of a time it’s been this tough.”

There are about two job openings for every person who is looking for work. This means that workers still have the upper hand. Many people say it’s easier now than it was before the pandemic to switch jobs or find more flexible work.

Ellen Shapiro, a software engineer in Madison, Wis., recently switched jobs to a higher-paying, remote position. The entire process took about two months — mostly, she says, because employers were so short-staffed that it was difficult to schedule interviews.

“There’s definitely still a lot of appetite for hiring,” said Shapiro, 41. “It is considerably easier to get another job and to improve how much money you’re making.”

Till Then, Keep Yourself Updated With All the Latest News From Our Website Journalworldwide and Get All the Recent Updates.
Share FacebookTwitterGoogle+ReddItWhatsAppPinterestEmail

Bill Pullman Net Worth, Age, Weight, Wiki, Career, and All…