DHS secretary and threatens: House Minority Leader Kevin McCarthy (R-Calif.) called on Homeland Security Secretary Alejandro Mayorkas to resign over his handling of the U.S.-Mexico border, saying that GOP lawmakers will consider impeachment next year if he does not step down.

“If Secretary Mayorkas does not resign, House Republicans will investigate, every order, every action, and every failure will determine whether we can begin impeachment inquiry,” McCarthy said at a press conference in El Paso, Texas, on Tuesday.

McCarthy cited the DHS director’s statements to Congress that the border is under control, the record number of border crossings, and the end of the Trump administration’s “Remain in Mexico” asylum policy as reasons for his resignation. “Our country may never recover from Secretary Mayorkas’s dereliction of duty,” McCarthy said. The minority leader’s remarks on impeachment are his strongest to date, but they fall short of a promise to introduce articles against Mayorkas.

McCarthy was nominated by House Republicans to serve as Speaker in the next Congress last week during a closed-door vote. However, he continues to face opposition from ultraconservatives who have urged him to be more aggressive on issues such as the impeachment of Biden administration officials and President Biden himself.

Rep. Andy Biggs (R-Arizona), the former chairman of the House Freedom Caucus, mounted a protest challenge to McCarthy for Speaker at the last minute, citing the minority leader’s lack of commitment to impeach Mayorkas. Biggs introduced impeachment articles against the administration official in the past. He received 31 votes in the House Republican Conference meeting by secret ballot, while McCarthy received 188. 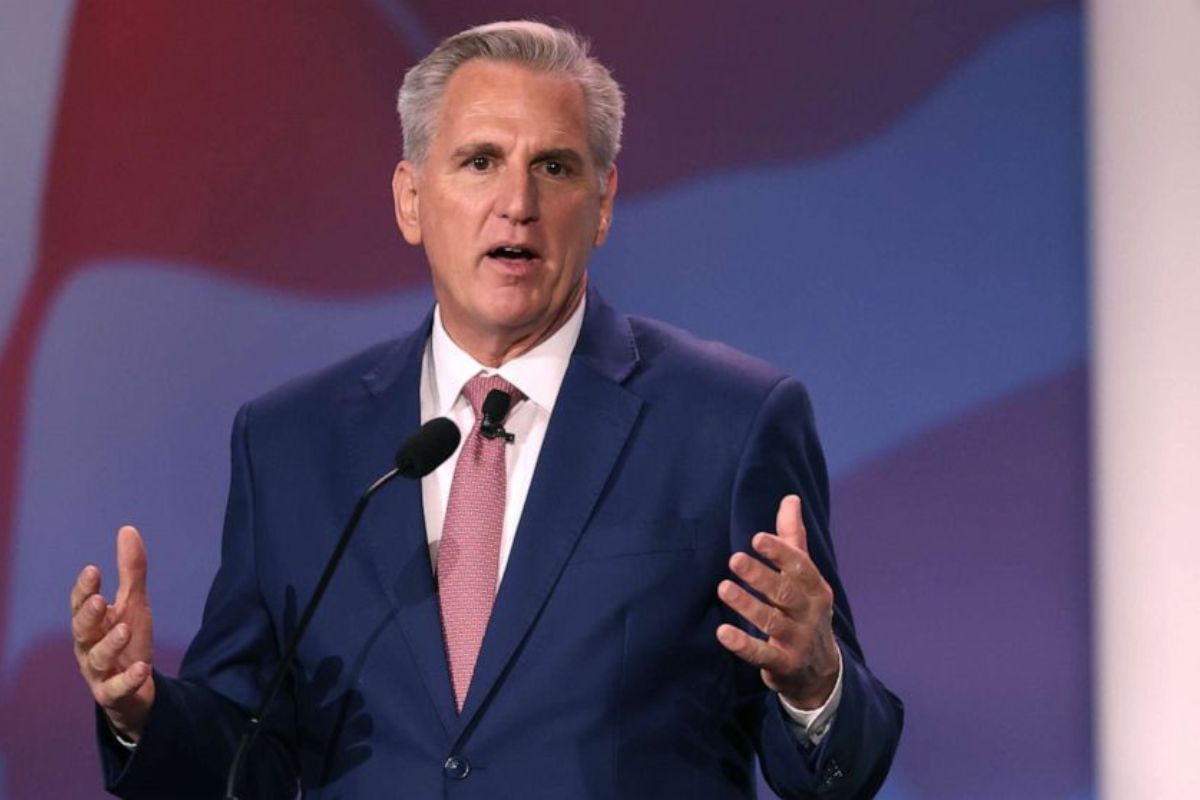 McCarthy must receive the support of a majority of those voting for Speaker on the House floor on January 3 in order to be elected to the position. However, Republicans won a narrow majority in the midterm elections of 2022, leaving McCarthy with little room for error on this vote. A small number of Republicans, including Biggs, have indicated they will not vote for him.

A day of touring the U.S.-Mexico border and meeting with border officials preceded the press conference with other House Republican members. McCarthy said that Republican Reps. Jim Jordan (Ohio) and James Comer (Ky.), the likely chairs of the House Judiciary and Oversight Committees next year, “have my complete support to investigate the collapse of our border, and the shutdown of ICE enforcement.”

“President McCarthy is correct. Americans deserve to be held accountable for the unprecedented border crisis. “Republicans will hold Secretary Mayorkas accountable for his failure to enforce immigration law and secure the border by any means necessary,” Jordan said in a statement distributed at the press conference. Jordan would oversee impeachment proceedings if they occurred.

Republicans made a pledge to investigate the Biden administration’s border and migration policies a key part of their midterm campaign message, and Comer has long said he will hold hearings about the border. House Minority Whip Steve Scalise (R-La.) joked in September that the House GOP would give Mayorkas a reserved parking spot because he would be testifying so often. Mayorkas, who has no intention of resigning, issued a statement in opposition to Congress shortly after McCarthy’s speech.

“Secretary Mayorkas is proud to advance the Department’s noble mission, support its exceptional workforce, and serve the American people. The Department will continue its efforts to enforce our laws and secure our border, while constructing a safe, orderly, and humane immigration system, according to a statement from the Department of Homeland Security.

The statement continued, “Congress members can do better than point the finger at others; they should come to the table and work on solutions for our broken system and outdated laws, which have not been updated in over four decades.”

Mayorkas told Congress last week that the border is under control, but he acknowledged that a record 1.7 million migrants attempted to cross the Southwest border during the fiscal year ending in September. “The entire hemisphere is suffering a migration crisis. We are seeing unprecedented movement of people from country to country,” he said.

In addition, he promised to look for new ways to restrict immigration now that a federal court has struck down Title 42, which permitted the agency to swiftly expel migrants without seeking asylum on the basis of public health concerns. Mayorkas said the department is currently evaluating how to expel Venezuelans at the border, a group that makes up a large part of migrants coming to America given the political and economic instability there.

The most recent calls for Mayorkas’ resignation come shortly after U.S. Customs and Border Protection Commissioner Chris Magnus resigned in response to President Biden’s request. McCarthy first appeared to open the door to Mayorkas’ impeachment during an April press conference. “This is his moment in time to do his job. But at any time if someone is derelict in their job, there is always the option of impeaching somebody,” McCarthy said at an April press conference in Eagle Pass, Texas.

Later, he downplayed the likelihood of impeachment, stating that he does not want the process to be political, as he claimed the impeachment of former President Trump by Democrats was. McCarthy reiterated this sentiment in El Paso on Tuesday. “We never do impeachment for political purposes. We’re having investigation,” McCarthy said.

“We know exactly what Secretary Mayorkas has done. We’ve watched across this nation, something that’s never happened before. We watched him time and again before committee say this border is secure, and we can’t find one border agent who agrees with him,” McCarthy said. “So we will investigate. If investigation leads to impeachment inquiry, we will follow through.”