A rural Georgia monument that some conservative Christians have criticized as satanic and that others have dubbed “America’s Stonehenge” was bombed before dawn on Wednesday in an attack that turned one of its four granite panels into rubble.

The Georgia Guidestones monument near Elberton was damaged by an explosive device, the Georgia Bureau of Investigation (GBI) said. The Elbert County Emergency Management Agency said the explosion was seen on video cameras shortly after 4 a.m. Pictures and aerial video show the destroyed panel on the ground.

The GBI released surveillance video of the explosion and a silver sedan speeding away from the scene on Wednesday evening. Investigators are asking for help from the public to find out who did it. No information about the suspects or a possible reason for what happened has been given. It’s not clear how many possible suspects are involved.

Chris Kubas, the executive vice president of the Elbert Granite Association, said that after vandalism in the past, video cameras connected to the county’s emergency dispatch center were set up at the site.

The enigmatic roadside attraction was built in 1980 from local granite, commissioned by an unknown person or group under the pseudonym R.C. Christian. 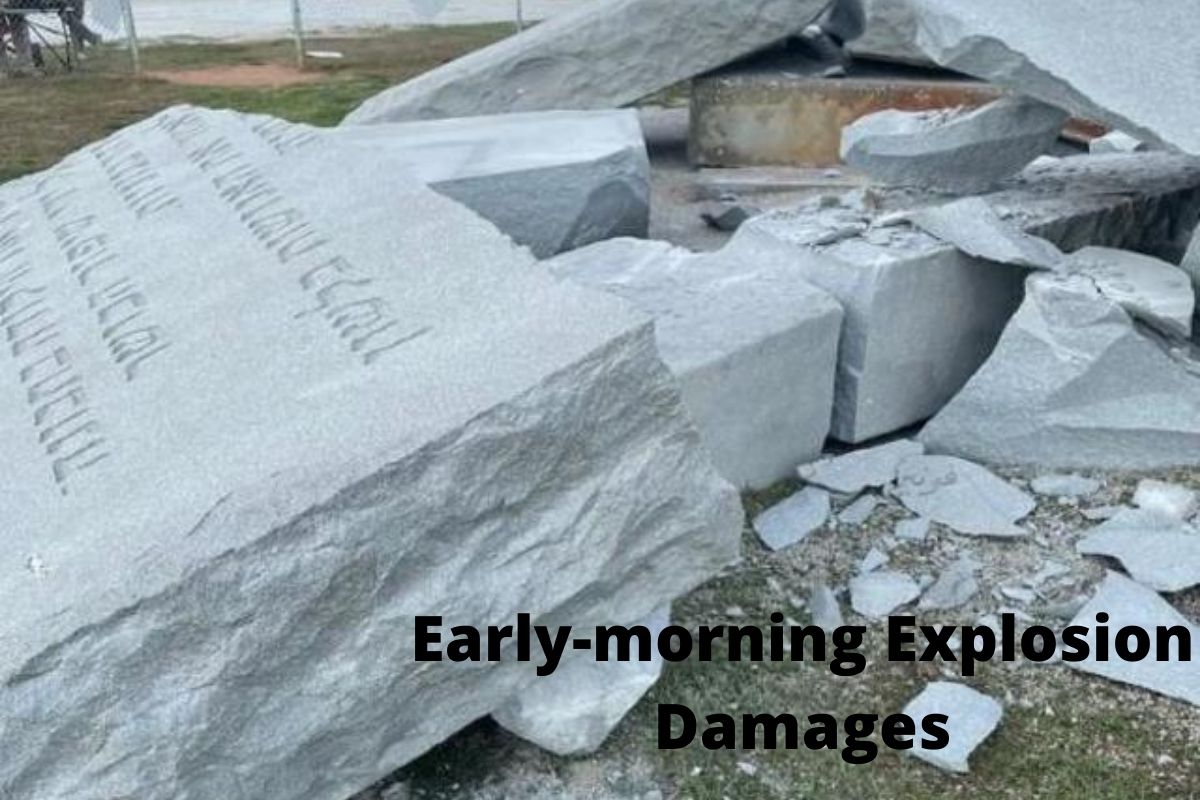 “That’s given the Guidestones a sort of shroud of mystery around them because the identity and intent of the individuals who commissioned them are unknown,” said Katie McCarthy, who researches conspiracy theories for the Anti-Defamation League. “And so that has helped over the years to fuel a lot of speculation and conspiracy theories about the Guidestone’s true intent.”

The 16-foot-tall panels have a 10-part message written in eight languages about how to live in an “age of reason.” One part says that the world’s population should stay at or below 500 million, and another says that people should “guide reproduction wisely, improving fitness and diversity.”

It is also a sundial and a calendar based on the stars. But far-right conspiracy theorists are after the panels because they talk about eugenics, population control, and a global government.

The monument’s notoriety took off with the rise of the internet, Kubas said, until it became a roadside tourist attraction, with thousands visiting each year.

During Georgia’s gubernatorial primary on May 24, third-place Republican candidate Kandiss Taylor said the Guidestones are evil and made destroying them part of her platform. This brought the site back into the spotlight. In late May, comedian John Oliver did a bit about the Guidestones and Taylor. McCarthy said that right-wing people like Alex Jones had talked about them in the past, but that Taylor “kind of brought them back to the public’s attention.”

“God is God all by Himself. He can do ANYTHING He wants to do,” Taylor wrote on social media Wednesday. “That includes striking down Satanic Guidestones.”

The monument had previously been vandalized, including when it was spray-painted in 2008 and 2014, McCarthy said. She said the bombing is another example of how conspiracy theories “do and can have a real-world impact.”

“We’ve seen this with QAnon and other conspiracy theories,” McCarthy said. “These ideas can make someone want to try to act in a way that supports these beliefs.” “They can try to go after the people and groups that are responsible for these false beliefs.”

Kubas and many other people see the stones as some kind of plan for putting society back together after the end of the world.

“It’s up to your interpretation as to how you want to view them,” Kubas said.

Near the South Carolina state line, the site is about 7 miles north of Elberton and about 90 miles east of Atlanta. Kubas said that granite quarrying is a major local business that employs about 2,000 people in the area.

The Georgia Bureau of Investigation, Elbert County sheriff’s deputies, and the police in Elberton are among the groups trying to figure out what happened. Technicians from the bomb squad were called to look for evidence, and a nearby state highway was closed for a while.

Kubas said the association has helped remove previous vandalism and will likely seek to stabilize the damage. He said local officials and community leaders may have to decide who, if anyone, pays for restoration.

“You didn’t have to come to see it and read it if you didn’t like it,” Kubas said. “But someone decided that they didn’t want anyone to read it.”