Fetterman’s Return to the Pennsylvania Campaign Trail Will Be Closely Monitored!

Fetterman’s appearance on Friday was closely watched by leaders and strategists from both parties. The Pennsylvania contest between Fetterman and famed doctor Mehmet Oz is widely seen as the nation’s best chance for Democrats to flip a Senate seat. For the GOP, retain the seat now occupied by the Republican senator. Pat Toomey is essential to regain the majority.

Fetterman tried to calm down the crowd at the rally by starting his speech with a sarcastic comment about the attacks made by his opponent. Oz criticized Fetterman for not going out in public since he had a stroke. On Thursday, he sent out a press release that said, “It’s been 91 days since Fetterman left his basement.”

“Wait, are we in Erie? Fetterman said, joking about having “1,400 people in my basement.”

Fetterman attacked Oz at the rally because he thought Oz was a rich rug bagger. He wore a black Carhartt hoodie. He also wanted to show that he was from Pennsylvania, so his team gave out yellow towels with the Fetterman logo that looked like the “Terrible Towel” from the Pittsburgh Steelers. His campaign slogan was “Every County, Every Vote,” which was written on a sign on stage.

Fetterman has made Oz’s connections to New Jersey a big part of his campaign for the Senate. Even though he was out of action because he was recovering from a stroke, Fetterman got good press for making fun of Oz on social media. For example, he got Snooki, a reality TV star from New Jersey, to record a video saying “Jersey won’t forget you.” Up until recently, Oz lived in New Jersey for many years, even though he went to school and got married in Pennsylvania. 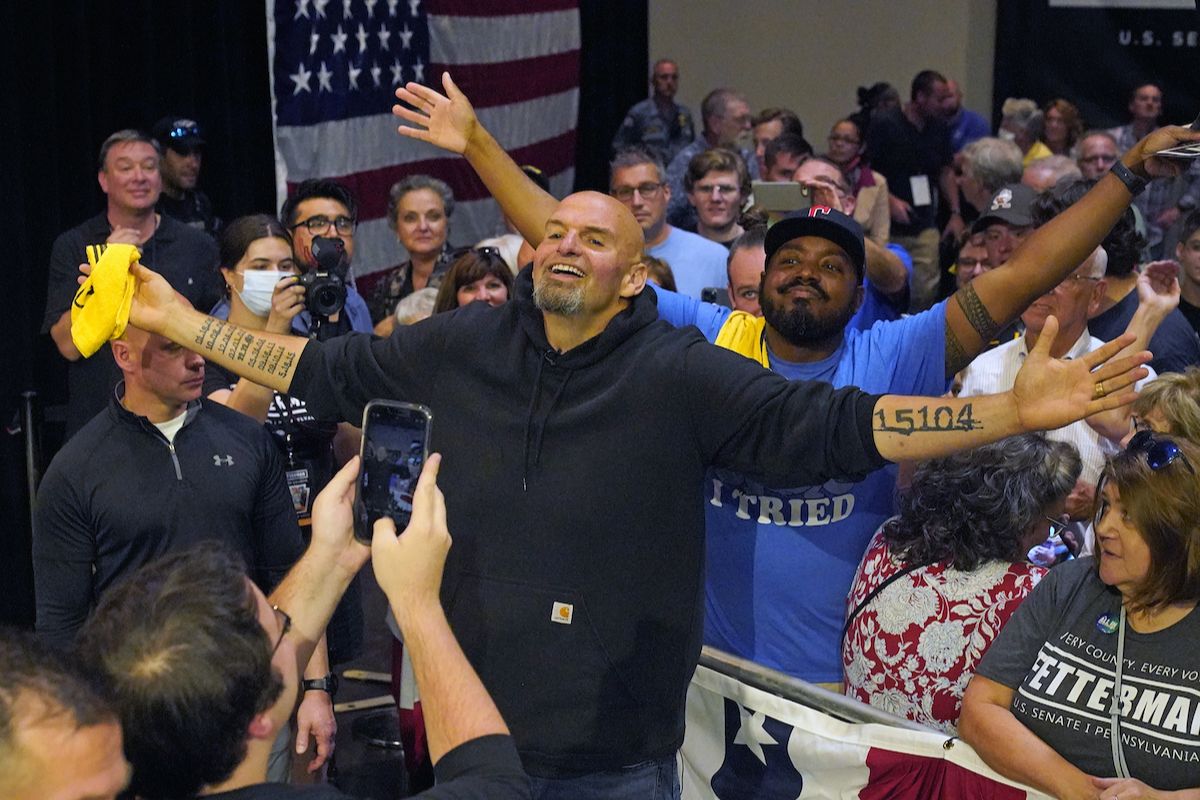 In a statement, Brittany Yanick, director of communications for Oz, said “John Fetterman refuses to be honest with Pennsylvanians or the press about his radical policies and past no-shows for the Commonwealth.” According to the Oz team, the Republican has hosted more than 140 campaign-related events since June.

“Dr. Mehmet Oz campaigns throughout the Commonwealth, listens to and shares the concerns of people he meets, and stands for Pennsylvanians unlike John Fetterman,” Yanick said. “Pennsylvania deserves answers from Fetterman now. been far too long.

On Friday, Fetterman seemed to be in good health and spoke with few problems. But sometimes, he had trouble getting his words out.

In interviews with reporters, Fetterman said he was physically and mentally capable of withstanding the rigors of a Senate campaign, and his doctor said he should be able to serve as long as he followed his orders. But Fetterman acknowledged he sometimes stumbles over his words and struggles to hear as he continues to recover.

Fetterman spoke for 10 minutes at the rally, but no one from the media asked him any questions. Since he had his stroke, he has only talked to two reporters.

By holding the event Friday night in Erie, Fetterman was able to campaign in one of the state’s most important counties and reintroduce himself to voters at a time and place where news coverage isn’t as strong as it would be. during the week in a big city.

Christopher Nicholas, a GOP consultant in Pennsylvania, said before the event, “He’s going to Erie because it’s Erie, which is as far away from Broadway as you can get in Pennsylvania.” “So if he loses, it will be in the state’s smallest media market.”

Fetterman said Friday that wearing Erie was key to his campaign’s success: “If you can’t win Erie County, you can’t win Pennsylvania.”

Fetterman has resumed campaigning since last month when he traveled to the Philadelphia area to attend three private fundraisers. Since then, he’s gone to two more big-budget events in person.

Even though he wasn’t running, Fetterman was ahead of Oz in the polls and money raised. In a recent Fox News poll, he was 11 percentage points ahead of Oz.

Fetterman bragged about the ballot, adding that he would campaign like he was late regardless.

“Have you seen some of the polls? Some of them seven, eight, nine, ten, even 15 points,” he said. “We’re still going to race like we’re still five points behind.”

Fetterman said again that he would be the “51st vote” for the Democratic agenda and get rid of the filibuster so that “things can get done for America.”

Friday, Oz tried to keep the pressure on Fetterman by asking him to let him debate for five hours before his rally. The campaign for Fetterman said that the plea was “an obvious and weak attempt to change the subject.” Fetterman’s aides said he would debate, but did not provide details.

According to Fetterman staff, nearly 1,400 people attended the event on Friday.

Fetterman asked at the rally, “Do you think Dr. Oz can fill a room like this?” He said he got three times as many votes as Oz in Erie County.

Scissor Seven Season 4 Is Latest Updates You Need to Know So Far!