Democrats in the House on Friday pushed their more than $700 billion domestic policy package across the finish line, sending to President Biden for his signature their long-negotiated plan to address drug costs, raise taxes on large corporations, and combat global warming.

The proposal has now been approved by both houses of Congress. This is the end of a long fight by Democrats to pass laws that meet Mr. Biden’s top domestic and economic goals. Even though the package is the result of a compromise that led to a narrower plan than the president’s original, wide-ranging social spending plan from last year, its approval gives Democrats a key legislative win before the midterm elections in November.

The bill, which was called the “Inflation Reduction Act,” was passed by the House by a vote of 220 to 207, along party lines. This was a few days after it was passed by the Senate 51 to 50. The Senate was deadlocked, so Vice President Kamala Harris broke the tie. Democrats used a process called “budget reconciliation” to pass the bill without the help of Republicans.

The White House said Friday that Mr. Biden will sign it sometime next week. He is currently on vacation in South Carolina.

“It’s a kitchen table issue,” House Speaker Nancy Pelosi said of the legislation in a Friday morning news conference. “If you are sitting at your kitchen table and wonder how you’re going to pay the bills. Your health care bills, your prescription drug bills, this bill’s for you.”

While the House is on its weeklong summer recess, which stretches to mid-September, lawmakers were summoned back to Washington on Friday to vote on the plan. Many members filed letters with the House clerk to vote-by-proxy, a process that allows them to designate another member present for the proceedings to cast a vote for them. 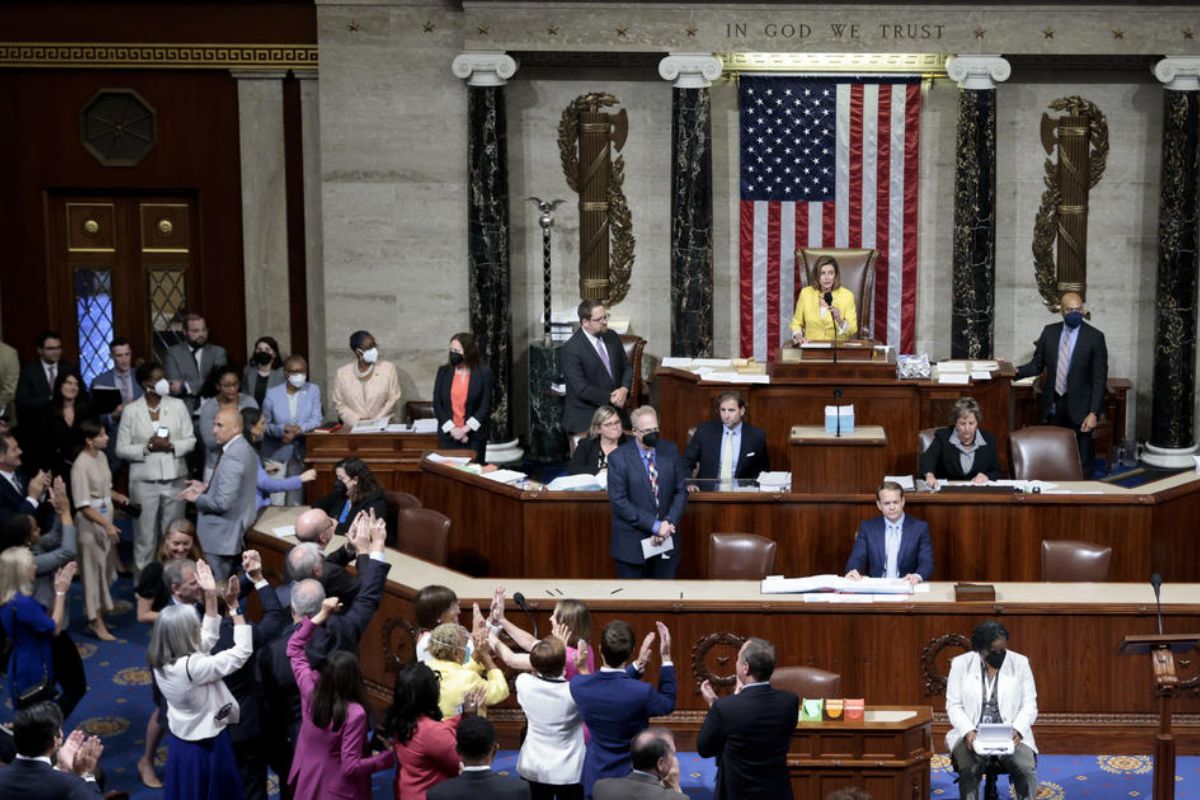 Its passage by the House is the last in a series of summer victories for the president and his party. These include the passage of bipartisan gun reform and mental health bill, bipartisan legislation to encourage U.S. manufacturing of semiconductor computer chips, a bipartisan plan to expand health care benefits for veterans who got sick because they were exposed to toxic substances from burn pits, and the killing of al Qaeda leader Ayman al-Zawahiri in a drone strike.

Even though the spending plan passed by Congress doesn’t include Democrats’ top priorities like paid family leave and universal pre-K, it does spend $369 billion on clean energy and climate initiatives, which is the most money ever spent by the federal government to fight climate change. The package also lets Medicare negotiate prices for prescription drugs, extends enhanced health care subsidies under the Affordable Care Act through 2025, and caps out-of-pocket drug costs for Medicare enrollees at $2,000 per year and insulin costs at $35 per month.

The tax revenue part of the bill includes a 15% corporate minimum tax for companies that make more than $1 billion a year, as well as stricter tax enforcement and compliance by the Internal Revenue Service. The Congressional Budget Office estimates that this will bring in an extra $204 billion over ten years.

According to the budget office, the Democrats’ legislative package will cut federal budget deficits by $102 billion over 10 years. However, this estimate does not include new money from stricter tax enforcement.

The $740 billion bill is a long way from Mr. Biden’s $3.5 trillion Build Back Better plan for social spending, which he sent to Congress last year. The wide-ranging plan ran into trouble quickly in the Senate. Sen. Joe Manchin, a moderate Democrat from West Virginia, raised concerns that new federal spending would cause inflation.

The White House engaged in months of negotiations with Manchin throughout 2021, though talks collapsed in December.

But Senate Majority Leader Chuck Schumer kept trying to find a middle ground on the proposal. After talks broke down and started up again, he made a surprising deal with Manchin at the end of last month.

Sen. Kyrsten Sinema, a moderate Democrat from Arizona who is also a key vote, also supported the bill. However, she had Democrats get rid of a part that would have raised taxes on “carried interest,” or profits that go to executives of private equity firms. She and other senators from the west also pushed for $4 billion to help people affected by drought.

The bill underwent more changes by the Senate after it was reviewed by parliamentarian Elizabeth MacDonough to ensure compliance with the reconciliation rules, who said a piece of Democrats’ drug-pricing plan that imposed penalties on drug manufacturers that raised prices beyond inflation on private insurers had to be removed. Her green light of the rest of the legislation, though, cleared the way for the upper chamber to take it up.

Democrats said the bill will maintain Mr. Biden’s campaign-trail promise not to raise taxes on Americans earning less than $400,000 per year and have argued it will help address rising consumer prices. But Republicans argued the plan will instead fuel inflation and harm job creation with its taxes on large companies, while its drug-pricing provisions will cause pharmaceutical companies to cut back on research and development.

Senate Minority Leader Mitch McConnell said last week that Senate Democrats are misinterpreting the anger of the American people as a call for yet another reckless spending and taxing spree. “Democrats have already stolen from American families once through inflation, and now they want to steal from them again.”

The Chosen Season 3: Release Date Status| Is This Series…