On both sides of the abortion debate, both the current president and the one who came before him have become unlikely heroes. But they did not start there.

Two future presidents spoke out about abortion around the turn of the 21st century.

“I’m very pro-choice,” then-real estate businessman Donald Trump said in a 1999 interview on “Meet the Press,” attributing his views to “a little bit of a New York background.”

That was the same era when Joe Biden, then a Democratic senator from Delaware, was squishy on the issue. Also in 1999, Biden voted to express approval for Roe v Wade. But he also, during that period, voted to maintain a rule that prevented American military women from using their own money to get abortions in overseas military hospitals. In 1977, Biden voted against a compromise that would have allowed Medicaid funding of abortions in cases of rape, incest, or where the life of the mother was a concern.
Until he was running for president in 2019, he supported the Hyde amendment banning the use of federal funds for abortions.

In 2022, both of these men have become unlikely heroes for the other side. Trump was the most important person when the Supreme Court, which now has one-third of its members chosen by Trump, took away the 50-year-old constitutional right to abortion.

And Biden, who was angry about the decision, gave a passionate speech in which he promised to use his position to help women get abortions in states where they are illegal. And he asked voters to help him get a Congress that will make the right law all over the country.

“Let’s be clear: the health and lives of women in this country are now in danger,” Biden said, showing a mix of anger and sadness as he talked about young girls who would be forced to carry the children of incestuous couples and women who would have to go through the pain of giving birth to the children of men who raped them. 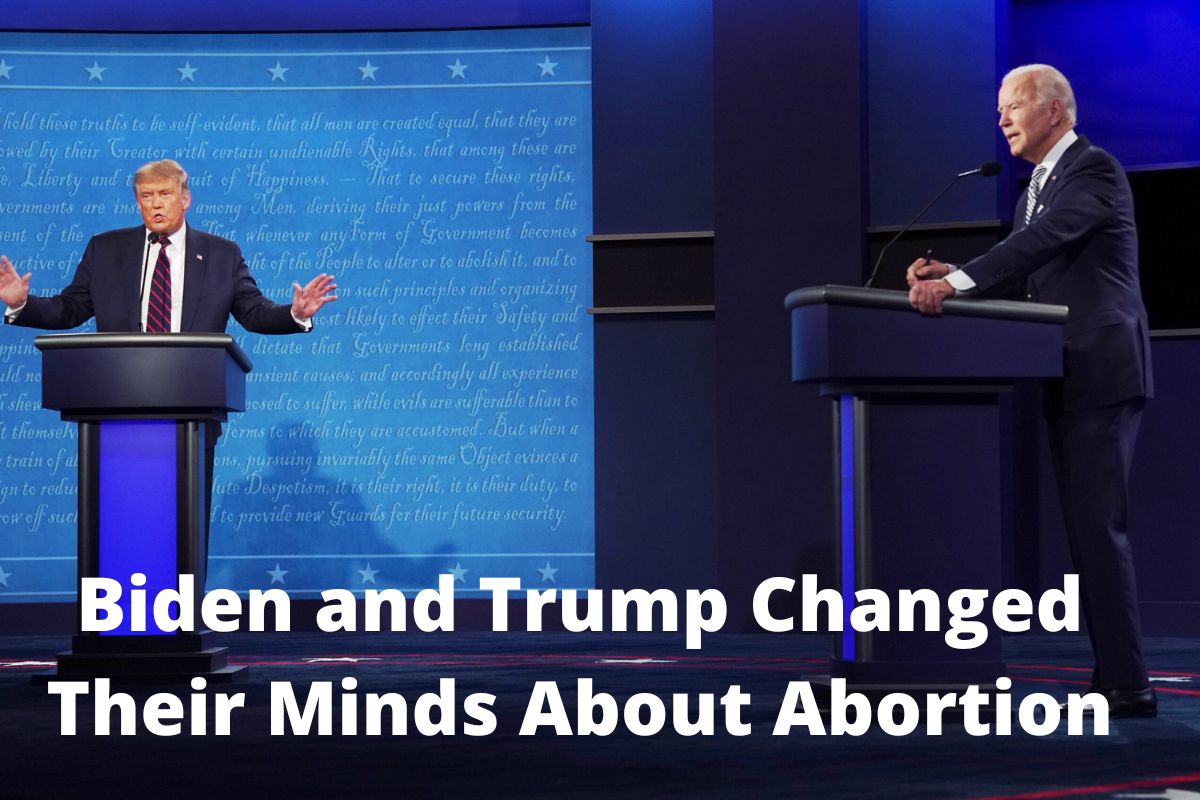 The ruling “made the United States an outlier among developed nations in the world,” the president said. But “this decision must not be the final word. My administration will use all appropriate and lawful power” to help women seeking an abortion, “but Congress must act. With your vote, you can act,” he added. “You can have the final word. This is not over.”

Polls show that a large majority of Americans support abortion rights. For many Americans, Friday was like seeing the death of a friend with a terminal illness who they knew would die soon. People mostly knew the ruling was coming because a leaked opinion explained why a right that the high court had set up in 1993 should be taken away. But it was still a gut punch. Outside the black metal barriers protecting the Supreme Court, protesters chanted and cried as they took in the reality of a day they had hoped might not come.

“It was like a death,” says Sonia Ossorio, president of the National Organization for Women New York.
And if Trump hadn’t been elected president in 2016, it probably wouldn’t have happened. Trump was the first person to run for president without any military or political experience. He used his skills in marketing and branding to win over key parts of the GOP base.
Trump was not an obvious favorite of religious conservatives and evangelicals. He was a three-times-married former casino owner who bragged in his books about having affairs outside of his marriage. But he supported a strong decision against abortion and promised to put people on the Supreme Court who shared his views.

Trump won the white evangelical voter overwhelmingly, with 81% to Democratic nominee Hillary Clinton’s 16% of that vote, according to exit polls, helping to put him over the top in pivotal states.

“They both switched, in a way,” says Barbara Perry, a presidential scholar and Supreme Court expert at the University of Virginia’s Miller Center.

She says that for Biden, it was “a change.” Biden was a devout Catholic who had lost a baby in a car accident. He was against abortion, and his voting record showed that he felt this way.

But since then, with changing times and views towards women (not to mention being married to Jill Biden, the first first lady to hold a professional job outside the White House), Biden has become a strong supporter of abortion rights, Perry notes.

Perry says that Trump’s change was a matter of business.

“He’s just a gross opportunist. He said what he needed to say to get the Republican nomination,” Perry says.

Trump still holds rallies and talks about running for president again in 2024, even though Congress is holding damaging hearings about his role in the Jan. 6 uprising. He was happy about the ruling on Friday.

“Trump told Fox News, “This brings everything back to the states, where it has always belonged.” “This is in line with the Constitution and gives back rights that should have been given a long time ago.”

Biden – who was in the Oval Office when the ruling came down and made tweaks to a draft speech prepared in anticipation of the decision – acknowledged in his Friday remarks that there was little he could do to ease the effects of the decision. The president said he would direct the Department of Health and Human Services to make sure “critical medicines” such as the abortion pill are “available to the fullest extent possible.”

The White House also said it would fight any attempts by states to stop women from going to another state to get an abortion.

But, Biden said, the truth is that only Congress can vote to make law what was in the now-defunct Roe decision.

With Biden’s low popularity and midterm trends that don’t help the party in power, Democrats could lose control of the House and possibly the Senate this fall. If that happened, there would be almost no chance that Congress would do anything to make abortion legal. Abortion rights activists worry that if a Republican was president, the GOP Congress would ban all abortions, even in states that are now voting to keep abortion access because of the new Supreme Court ruling.

Democrats hope that the abortion issue will get people who don’t want Republicans in charge but aren’t sure if they want to go to the polls to vote. Friday, a lot of Democratic candidates said that if they were elected, they would fight for abortion rights.

In the past, people who were against abortion were better at getting people to the polls. This may have been because people who supported abortion rights were too sure that Roe wouldn’t be overturned. Democratic operatives think that the ruling on Friday could change that.

The executive director of the Democratic SuperPAC Priorities USA, Danielle Butterfield, says that putting abortion access at the center of our messages before the midterm elections is important to get people to vote against the immediate threat that Republicans pose to both reproductive rights and democracy. “The threat of Republican extremism has grown since 2020, and we’ll remind voters of that to get them to the polls.”

Ossorio thinks women will vote in November to show how they feel about the decision made on Friday.

“We’re at the end of our ropes,” says Ossorio, whose family has had to deal with COVID, a lack of baby food, and a lack of child care for years. “This is a very important turning point. We don’t have the energy to be polite or move out of the way like we’re “supposed” to. Women are now very determined.”

Till Then, Yourself updated with all the latest news from our website Journalworldwide and get all the recent updates.

The Best Mechanical Keyboards, Whether You’re Typing Or…