How Long Kendall Jenner and Devin Booker Have Been Dating?

Earlier this summer, it appeared that Kendall Jenner and Devin Booker had broken up. Since then, the supermodel and the basketball star for the Phoenix Suns have reconciled and seem to be growing closer to one another. Almost two years have passed since they first introduced the world to their low-key love story on Instagram, and in that time, they have kept most of the facts of their relationship under wraps.

We haven’t seen much of the couple together except for some Valentine’s Day pictures, a brief appearance at Kourtney Kardashian’s wedding, and the occasional flirtatious comment. Kendall and Devin spent time together in Mailbu, celebrated Independence Day in the Hamptons, and went on a romantic vacation at a ranch in Idaho. Kendall and Devin’s on-again, off-again relationship is a juggling act. Learn all about the secretive couple and their relationship with this Article.

Who is Kendall Jenner?

American model, media personality, and socialite Kendall Nicole Jenner was born on November 3, 1995. Raised by Kris and Caitlyn Jenner, she became famous because of their reality show, Keeping Up with the Kardashians. At the tender age of 14, Jenner entered the modeling industry. Her breakthrough years were in 2014 and 2015 when she walked the runways for high-fashion designers in New York, Milan, and Paris after having previously worked in commercial print ad campaigns and photoshoots. As a brand ambassador for Estée Lauder, Jenner has modeled for their advertisements and has been featured in editorials and on the covers of LOVE and other international Vogue publications.

In 2015, Jenner debuted at No. 16 on Forbes’ list of highest-earning models with an estimated yearly salary of US$4 million. In 2017, Jenner was crowned the world’s highest-paid model by Forbes, dethroning model Gisele Bündchen, who had been at the top of the list since 2002.

Who is Devin Booker?

Born on October 30, 1996, Devin Armani Booker is a professional basketball player for the NBA’s Phoenix Suns (NBA). Booker was drafted by the Phoenix Suns with the thirteenth overall choice in the 2015 NBA draught. His father, Melvin Booker, was a professional basketball player. After playing collegiate basketball for one season with the Kentucky Wildcats, Booker was drafted by the Suns. Booker is a three-time NBA All-Star and led the Suns to the NBA Finals in 2021. He scored 70 points in a game against the Boston Celtics on March 24, 2017, when he was just 21 years old. In March of 2019, at age 22, he became the youngest player in NBA history with consecutive 50-point games. 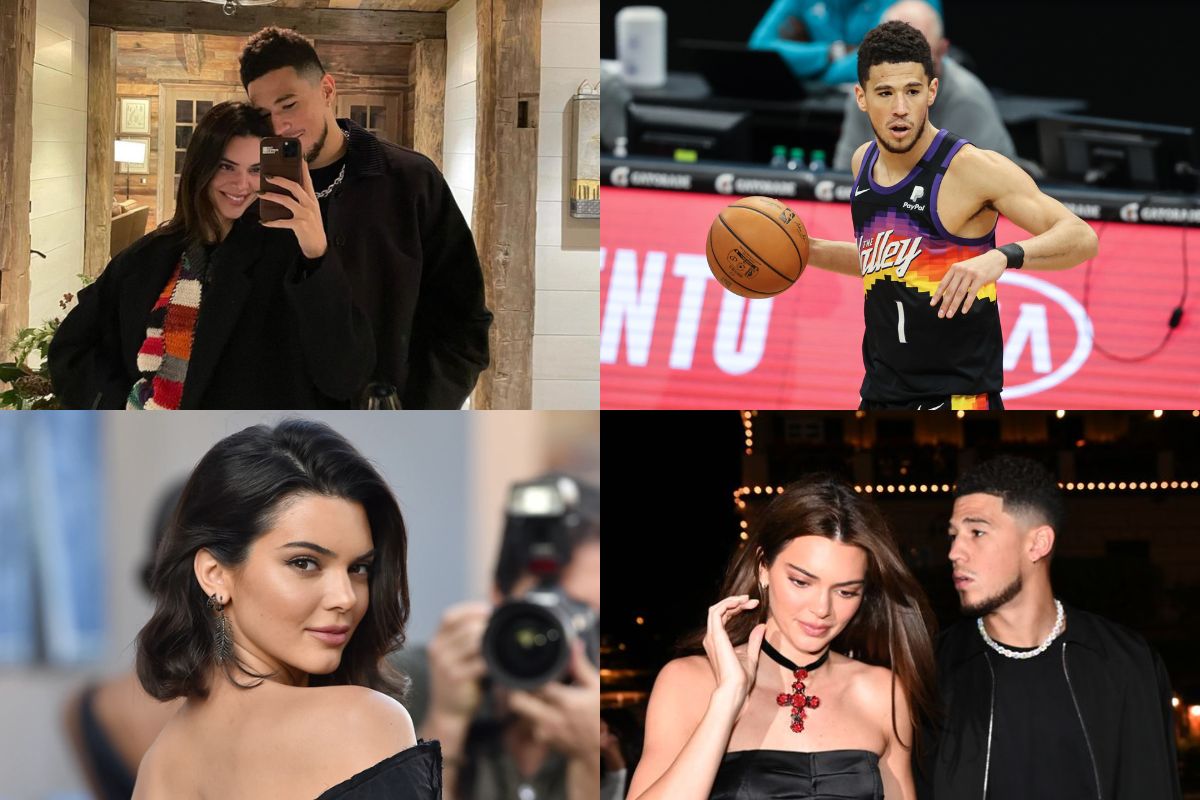 Timeline of Kendall and Devin’s Relationship

Kendall and Devin are not only back together, but also seem to be having the time of their lives. To mark the release of NBA 2K23, the couple went out on the town for the evening. Kendall and Devin, as if they weren’t cute enough already, were dressed in adorable matching all-black outfits.

The NBA star isn’t shy about his feelings for Kendall.

Kendall Jenner celebrated the week of August 18 by posting a bikini selfie on Instagram, complete with a bottle of 818 tequila and a striped beach blanket. Comments like “#drink818 always ” and “love it Kendall” show the supermodel’s friends and followers approve of her new business venture.

The real scoop, though, is that Kendall’s boo left a subtly flirtatious note in the comments area, complete with an “emoji”. The brief online exchanges between Kendall and Devin have left us with a mixed bag of emotions.

Kendall and Devin Go Ax-Throwing and Ziplining on July 31, 2022

Even if Kendall’s adventurous spirit was previously unknown, we now know that it matches that of Devin’s. Kendall posted a video to her Instagram story showing her boyfriend Devin making short work of a tree target with an axe. The couple is clearly back together.
Their date in the great outdoors continued. Kendall and Devin increased the adventure level, choosing to soar beyond the treeline on a zipline. Kendall also shared Instagram Stories with photos of the landmarks they visited.

Kendall Seems to Confirm that she and Devin are Back Together on July 17, 2022.

It appears that Kendall and Devin spent the weekend together in Napa, California, at a friend’s wedding, following recent sightings in Malibu and the Hamptons. Kenny, dressed to the nines in a forest green ruched gown, posted a cute photo to her Instagram Story. However, our attention was drawn to the man standing behind Kenny, who was wearing a black tuxedo and had his hand on the model’s waist. Even though we can’t see their faces, it’s clear that Kendall brought Devin as her date to the event; after all, they’re cuddling up in the photo together. Is Kendall’s silence a back-on-again, off-again signal? At this point, all we can do is wait and watch what happens.

8 July 2022: Kendall’s Shirt Is a Sweet, Understated Reference to Devin

Alright, this feels like confirmation that the low-key couple is currently sailing through smoother waters. In a sweet nod to her on-again, off-again beau, Kendall Jenner was photographed leaving her Los Angeles gym in an oversized tee, black biker shorts, and sneakers after a workout. The model chose to wear a vintage Phoenix Suns tee, repping the team that Devin has been playing for since 2015.

A true basketball bae if ever there was one! Kendall had already expressed support for Devin’s profession by re-sharing photographs of the NBA star to her Instagram story.

After Two Years Together, Kendall and Devin Split up on June 22, 2022

After attending Kourtney Kardashian’s wedding and having a “really nice time,” Devin and Kendall reportedly broke up almost a month later. After more than two years together, a close friend of the model and athlete told E! The breakup news has finally arrived. Apparently, Kendall and Devin “had a tough patch recently and have been divided for approximately a week and a half,” as one insider put it. While at the Kravis wedding, Kendall and Devin “started to feel like they weren’t aligned and realized they have very different lifestyles,” as the sources put it. Despite the couple’s apparent breakup, the source said, “Kendall and Devin hope to make it work, but as of now, they are split.”

Kendall and Devin Disclose Their Relationship Status and Discuss Their Plans for Marriage, On March 9, 2022

Don’t expect a wedding any time soon, even though Kendall and Devin have been Instagram official since February 2021 and recently shared more about their love. According to a source close to the pair, according to E! News, they are in love but are not in a rush to propose.

The couple informed the source that while their love was “going good,” they had no immediate plans to get married. “Kendall is not the typical or traditional kind of girl, and she isn’t particularly concerned about having a lavish wedding. She is happy with the current state of her relationship with Devin.”

The insider went on to say that despite having incredibly busy schedules, Kendall and Devin still find time for one another whenever they can: “Kendall appreciates the thoughtful small things Devin does for her because it makes her feel loved and valued. The family enjoys seeing them together and her happy, and they have a lovely relationship.”

Kendall and Devin Share Adorable photos for their first anniversary on June 12, 2021

On social media in celebration of their one-year anniversary, the normally secretive couple displayed their union a little more. Devin and Kendall each shared pictures of the other on their Instagram Stories to commemorate the important day.

Devin and Kendall were pictured playing with the basketball player’s dog as Kendall began her eulogy. Devin was captured in her second photo lying in a stunning setting.

The model wrapped up her Stories with a sweet image of the couple holding hands aboard a private jet.

In the meantime, Devin posted a collection of images of his own, beginning with a picture of a stunning environment. The number “365” in the caption of the photo of Kendall represents the duration of their relationship. The caption for the following image, which showed Devin and Kendall floating in the sea, stated “52,” the number of weeks they have been dating.

According to the Committee, Trump Removed a Sentence From…

Zac Efron Net Worth: What Is an Estimate of His Baywatch…