Republican opponent shifts: Senate Minority Leader Mitch McConnell (R-Ky.) defeated Sen. Rick Scott’s (R-Fla.) bid to succeed him, but the fight is far from over. McConnell is now battling Scott and other Senate conservatives over whether to block a year-end spending bill before Christmas.

The GOP leader wants to pass the omnibus package funding the federal government before the end of December, according to Senate Republican and Democratic sources. But he’s coming under increasing pressure from conservatives who want to freeze federal spending until January, when Republicans will take control of the House.

Scott told The Hill he plans to “actively” press for a stopgap funding measure freezing federal spending levels until next year, something he and Republican Sens. Mike Lee (Utah) and Ted Cruz (Texas) called for in September in a Fox News op-ed.

This would put spending talks on hold until Republicans gain control of the House and have more leverage to negotiate the overall budget and specific priorities, such as more funding to secure the US-Mexico border. “We have to have the plan to deal with inflation, we’ve got to have the plan to deal with the border,” Scott said. “My goal is to organize Republicans to have our ideas, what we’re going to get done.”

Scott, who colleagues believed was considering a presidential run in 2024, has stated that he is focused on the Senate and seeking reelection to a second term. “I think my role is trying to do the things that are important for Floridians,” he said. “I plan to run for reelection as U.S. senator.” Another conservative Republican senator confirmed that another stopgap measure known as a continuing resolution, or CR, will be proposed. The current CR expires on December 16.

According to a Senate aide, Scott will continue to put pressure on McConnell when they disagree on fundamental party strategy, such as whether to work with Democrats to pass an omnibus bill in the lame-duck session. “He’s not quiet when he is upset with the way things are going or has a position on something,” the aide said, noting that Scott’s style “is to get out there pretty aggressively on things.” 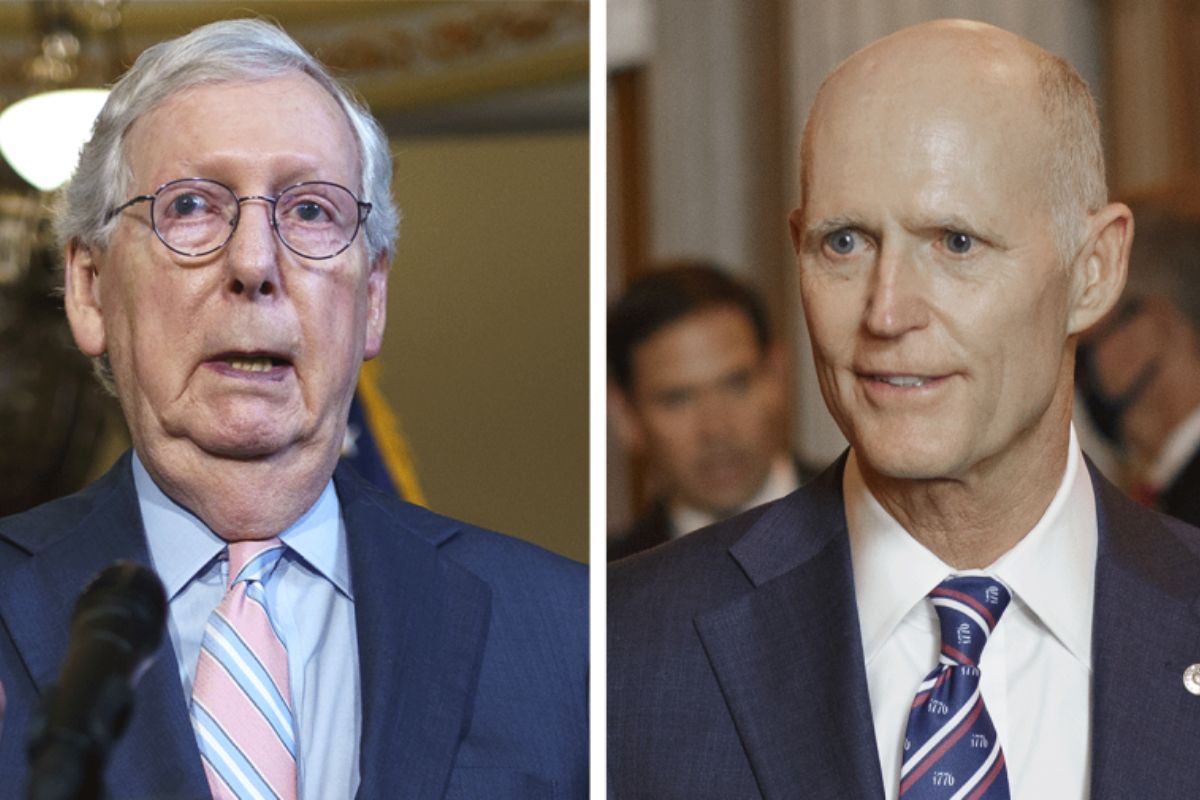 When McConnell’s staff met outside the Capitol with other senior Senate staff last week, they drew criticism from outside conservative groups. “It did not appear that McConnell is interested in delaying the Biden agenda for another year,” a source familiar with the conversation said. Republican Senate Whip John Thune (S.D.) stated that Republican senators are still debating their spending strategy when they return to Washington next week.

“We’re having discussions about that,” he said. “There’s going to be a strong argument, I think, for just doing a [continuing resolution] largely because the Dems who run this place right now have not been able to agree on a top line.” “It appears that we’re heading toward a CR,” he added, but admitted that this could result in a standoff in the early months of next year. “Based on how it feels around here right now, it appears to be a CR, but that does create… some challenges down the road that we would have to deal with next year.”

The discussions appear to be similar to those that occurred in 2010 when Republicans won control of the House but Democrats retained control of the Senate. Republicans insisted on deferring budget negotiations until the next Congress, resulting in a months-long standoff between the Obama administration and the new House Republican majority led by then-Speaker John Boehner. In April 2011, then-President Obama agreed to $38.5 billion in spending cuts.

Republicans now want to cut funding for an estimated 87,000 new IRS agents authorized by the Inflation Reduction Act, which Democrats passed this summer on party-line votes. Conservative organizations such as the Heritage Foundation, Heritage Action, the Club for Growth, and the American Conservative Union urged congressional Republicans earlier this year to insist that any omnibus spending bill end President Biden’s national COVID-19 emergency declaration, which he has extended until 2023.

Republicans will have significantly more bargaining power in such negotiations once they control the House. However, McConnell and other Senate Republicans are hesitant to delay the fiscal 2023 spending bills, which began on Oct. 1, until next year. This would likely delay, if not jeopardize, the passage of additional military and economic aid to Ukraine, a top McConnell priority.

Last week, the White House requested $37.7 billion in new funding for Ukraine, as well as more than $8 billion for coronavirus vaccines and treatments. Senate Republicans who oppose the proposal to postpone an omnibus spending bill until next year argue that it will also postpone the National Defense Authorization Act (NDAA), which will likely be included with the spending bills in December due to a lack of floor time.

“I would prefer that both the NDAA and the omnibus be completed this year so that we can get started on the next one right away,” said Sen. Kevin Cramer (ND), who voted to re-elect McConnell as Senate Republican leader. House Minority Leader Kevin McCarthy (R-Calif.), who is working to secure enough votes to become the next Speaker in January, floated the idea of delaying the defense authorization bill last week, despite the fact that members of the Armed Services Committee have taken pride in passing that bill on time for the past 60 years in a row.

“I’ve seen what the Democrats have done on many of these issues, particularly the NDAA — the woke-ism that they want to bring in,” he told reporters. “In fact, I believe the NDAA should be valid until January 1st of this year — and let’s get it right.” Other high-priority legislative items, such as an energy project permitting reform bill negotiated by Sen. Joe Manchin (D-W.Va.), require the omnibus to move before the end of December if they are to have a chance of passing Congress.

Another candidate for inclusion in the year-end spending package is the Electoral Count Act, a bipartisan bill that clarifies the vice president’s only ministerial role in certifying the winner of a presidential election. Cramer dismissed the claims of fellow Republicans that the omnibus could be finished up quickly in January under a new House Republican majority. Instead, he thinks it’s like spending negotiations would drag on for weeks or months, as they did in 2011. “The idea that we could somehow deal with it in the first week of the new Congress, that’s just not realistic,” he said.

“So while I understand particularly the probably Speaker’s desire to delay some of these things, I don’t see there being that much more leverage,” he added, he added referring to McCarthy. Senate GOP aides say that retiring Sen. Richard Shelby (Ala.), the top-ranking Republican on the Appropriations Committee and a longtime McConnell ally, doesn’t support postponing major spending decisions until next year, when he will no longer be in Congress.

“I think we ought to do our jobs,” Shelby told reporters in September. “I want to help Leahy best I can to meet our obligation,” referring to Senate Appropriations Committee Chairman Patrick Leahy (D-Vt.), who will also retire at year’s end.