According to Japanese officials, a North Korean ICBM could reach the US mainland

A North Korean intercontinental ballistic missile that landed in Japan’s exclusive economic zone on Friday had the potential range to strike the US mainland, Japanese officials say. The United States, Japan, and South Korea all condemned North Korea for launching the missile, which landed about 200 kilometers (124 miles) west of Oshima-Oshima island in Hokkaido’s northern prefecture. There were no reports of ship or aircraft damage.

“We naturally lodged a strong protest against North Korea, which has repeated its provocations with unprecedented frequency,” Fumio Kishida, Japan’s prime minister, told reporters in Thailand, where he is attending the Asia-Pacific Economic Cooperation (APEC) summit meeting. “We have told (Pyongyang) that we absolutely cannot tolerate such actions,” Kishida said. “Japan, the US, and South Korea must coordinate closely to work toward the complete denuclearisation of North Korea.”

The launch on Friday will fuel fears that the North has made significant progress in developing weapons capable of delivering nuclear warheads anywhere in the United States. North Korea also has two other types of ICBMs, the Hwasong-14 and Hwasong-15, which were tested in 2017 and could potentially reach parts of the US mainland. The regime conducted its first successful ICBM launch in over four years in March of this year, with flight data indicating it was capable of reaching the entire continental US.

The US vice-president, Kamala Harris, convened a meeting with regional leaders on the sidelines of APEC to discuss the launch, saying that North Korea’s conduct destabilized the region and raised tensions, while South Korea’s president ordered officials to push for stronger sanctions against the North.

The launch came a day after North Korea launched a short-range ballistic missile while threatening “fiercer military responses” to US efforts to increase its security presence in the region with its allies, saying Washington was making a “gamble it will regret.” 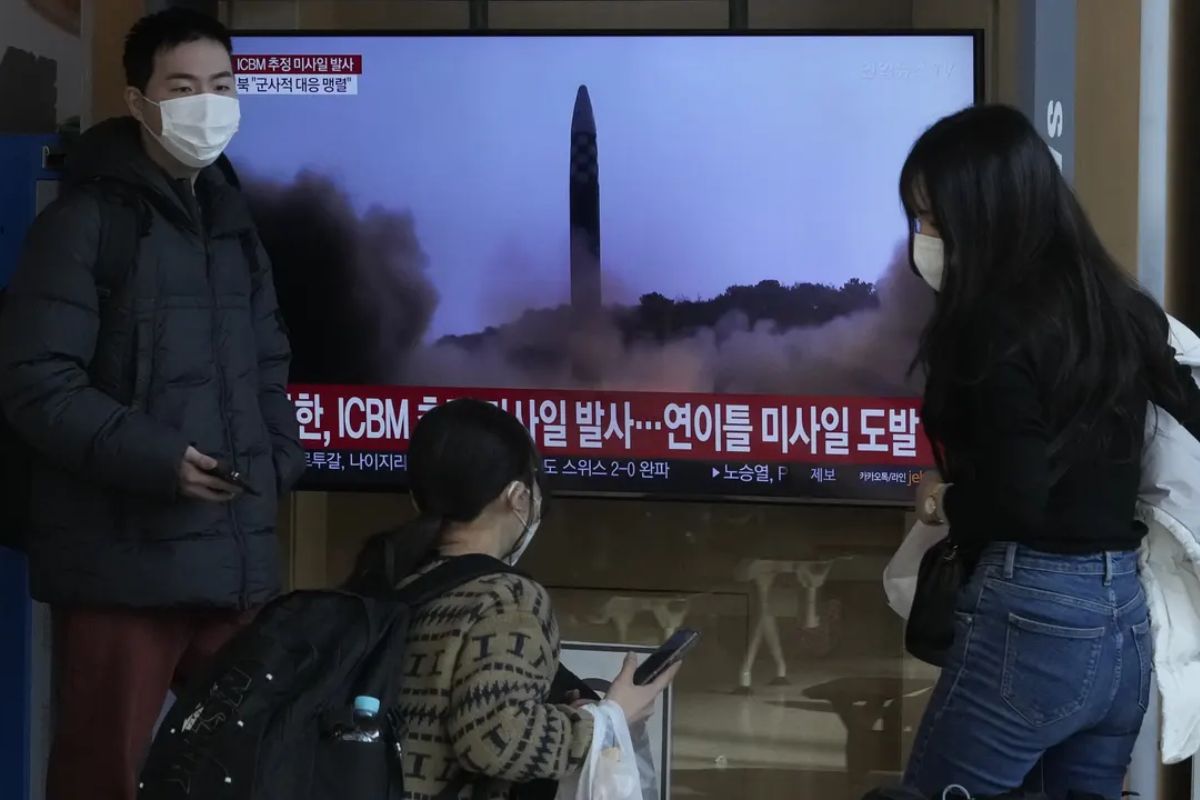 According to a statement issued by Japan’s defence ministry on Friday, “North Korea launched an ICBM-class ballistic missile from near the western coast of the Korean Peninsula at around 10.14 (0114 GMT) today.” The missile flew 1,000 kilometres (621 miles) at an altitude of 6,100 kilometres and at speeds of Mach 22, according to the South Korean military, who described it as a “serious provocation endangering peace and security on the Korean Peninsula.”

Tokyo’s defence minister, Yasukazu Hamada, told reporters that the “ICBM-class missile” had been fired on a “lofted trajectory” meaning the missile is fired up, not out, typically to avoid overflying neighbouring countries. “Based on trajectory calculations, the ballistic missile this time could have had a range capability of 15,000 km, depending on the weight of its warhead, and if that’s the case, it means the US mainland was within its range,” he said.

South Korea’s president, Yoon Suk-yeol, ordered officials to push for strong sanctions on North Korea after an emergency national security council meeting. He also called for implementation of strengthened extended deterrence to counter the North’s threats, his office said in a statement.

The prime ministers of Australia and Canada spoke out against the launch at Apec. Australia, according to Anthony Albanese, is ready to join a global response, while Justin Trudeau says the test is a clear violation of UN resolutions.

This was North Korea’s second intercontinental ballistic missile test this month. According to outside experts, North Korea’s ICBM launch on November 3rd failed mid-flight. It was thought that the test involved a new type of developmental ICBM.

This year North Korea has conducted a record number of missile tests, which are banned by UN security council resolutions that have sanctioned the country over its missile and nuclear weapons programmes. The North also fired hundreds of artillery shells into the sea recently as South Korea and the US staged exercises, some of which involved Japan.

The country had halted weapons launches for about a week before Thursday’s test, which was preceded by the North’s foreign minister, Choe Son-hui, threatened “fiercer” military responses. Choe was referring to US Vice President Joe Biden’s recent trilateral meeting on the sidelines of a regional gathering in Cambodia with his South Korean and Japanese counterparts.

The three leaders issued a joint statement strongly condemning North Korea’s recent missile tests and agreeing to collaborate to strengthen deterrence. Biden reaffirmed the United States’ commitment to defend South Korea and Japan with all of its capabilities, including nuclear weapons.

On Thursday evening Kishida said he had expressed “serious concerns” to Chinese President Xi Jinping on security issues including North Korea after the two leaders held their first face-to-face talks. “On North Korea, I stated that we expect China to play a role, including in the UN Security Council.” Joe Biden also discussed North Korea’s recent missile tests with Xi earlier this week, as speculation mounts that the reclusive regime will conduct its seventh nuclear test soon.

What Is The Net Worth Of Damola Adamolekun? CEO Of PF…