Juniper Rook, 17, is too young to vote. But that didn’t keep her from constantly refreshing the vote totals for Measure 114, which she campaigned for in the hopes that it would keep her and her classmates safe. When the lead of the Yes on Measure 114 campaign in Bend texted her to say it passed, she cried. “It’s just so surreal to know that Oregon is one of the states that’s taking a first big step to creating a safer place for all people,” Rook said.

The Redmond high school student said she and many of her friends are concerned about going to school because shootings have become so common. When 17 students were killed at Stoneman Douglas High School in Florida, she said she began advocating for stricter gun laws. She was 12 years old.

“I feel like even people who aren’t parents have a responsibility to keep kids my age safe,” she explained. “And it hadn’t been happening until now. It was extremely disappointing.” This week though, she’s proud of the grown-ups.

Amazement, sadness, fear, relief, a renewed faith in humanity, and a dark feeling that things will keep getting worse – all of these reactions swept the state as it became clear this week that Measure 114 would pass by about two percentage points.

The new laws requiring a permit to purchase a firearm and prohibiting magazines that hold more than 10 rounds of ammunition will go into effect thirty days after the vote is certified. The change will catapult Oregon from the middle of the pack to one of the ten states with the strictest gun laws in the country. And for many people on both sides, the upcoming changes are deeply personal and will affect their daily lives. 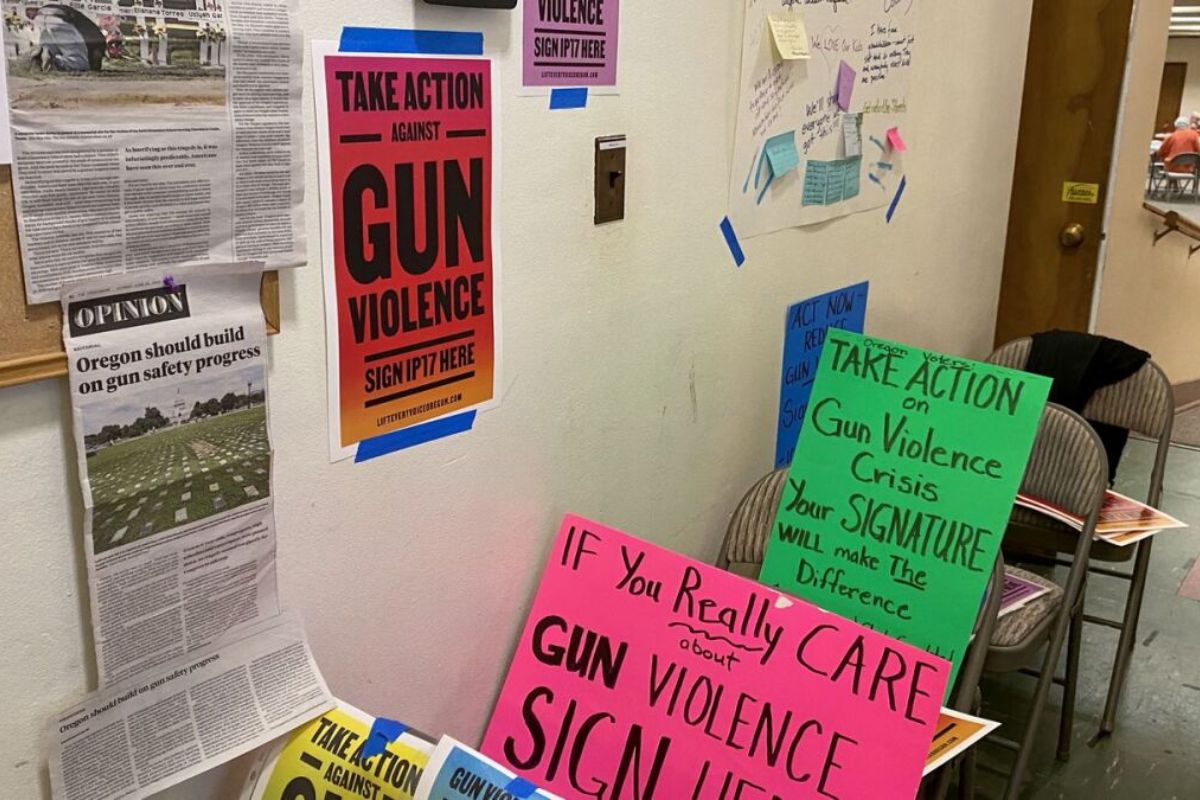 The Oregon Hunters Association’s legislative committee chairman, Paul Donheffner, who had advocated against Measure 114, was disappointed. What would his various hunting associations use for fundraising raffles if they couldn’t give rifles to people who didn’t have current purchase permits, he wondered?

“It had a very appealing title, ‘reduction of gun violence act,’” he said. “If that’s all you read before you voted, then you’d say yes. I mean, who’s for gun violence? Nobody.” Donheffner, who lives in Marion County, believes that creating a permit system that requires a gun safety course will be costly and inefficient. And he doesn’t believe it will do anything to reduce the increased gun violence in Portland or mass shootings.

As expected, the measure was overwhelmingly approved in Multnomah County, garnering 74% of the vote as of Thursday evening. Deschutes County, a mostly rural region anchored by Bend, was much closer. There were nearly equal numbers of supporters and opponents. The measure was defeated by about 1,000 votes out of over 100,000 cast.

In rural, mountainous Wallowa County, the numbers were nearly identical to Multnomah, with 73% of voters opposing stricter gun laws. More people voted against stricter gun laws than Republican governor candidate Christine Drazan. At the same time, the new rules were more popular among Wallowans than Democratic Gov.-elect Tina Kotek, who received about 100 fewer votes in the Eastern Oregon county than Measure 114.

The measure would have failed in 29 of Oregon’s 36 counties. However, the areas where it won are home to the majority of the state’s population.

Regardless of how individual Oregonians voted, the rules outlined in Measure 114 will become law for all residents in the near future. But what happens next is a little unclear. A spokesperson for the Oregon State Police, the agency in charge of developing the permit-to-purchase system and overseeing the new background checks, stated that they would not be able to provide specific timelines for the “rulemaking” process they will go through to iron out the kinks until the election is certified by the Secretary of State.

Despite a lack of guidance from the state law enforcement agency, some county sheriffs, such as Michelle Duncan in Linn County and Brad Lohrey in Sherman County, have stated that they will not enforce the ban on high-capacity magazines. It’s unclear what that means, because sheriffs aren’t legally allowed to break state law.

Some on the left are more concerned about sheriffs not enforcing the law than they are about them wielding too much power over who gets a permit. That is just one aspect of the law that has gun owners concerned.

For example, anyone who currently owns larger capacity magazines or guns with more bullets is allowed to keep them under the new rules, but many are concerned that proving a purchase date will be difficult.

Others claim that meeting demand for the newly mandated safety courses, which include live-fire training, will be nearly impossible. They are concerned that the financial burden on local law enforcement will be excessive. They are concerned that the state will prohibit all gun purchases while they work out a new system. However, for those who voted in favour of the measure, it is an unqualified victory.

“I have three kids in school the impact of the countless ‘lockdowns,’ both real and practice ones, has had a lasting mental impact on them,” wrote Matt Coleman, a Lake Oswego resident who works in tech sales. “We’re always wondering, ‘Is today the day?’ when we get the call that there’s a school shooting.” For Coleman, the measure appears to be a common sense approach to regulating a lethal weapon.

“It doesn’t take any guns away; it simply adds some measure of ensuring that the majority of people follow a process,” he wrote in a Twitter direct message. “Criminals will steal guns in the same way that people steal cars. I just want to make things more difficult for them.”

“My preferred concealed carry weapon does not have more than 10 rounds in its magazine anyway,” Michael Fuller, a Portland civil rights lawyer, wrote in a direct message on Twitter, “so I figured that passing 114 would make it less likely I would be outgunned if I were in a gunfight with an active shooter.”

Fuller was among a small but vocal group of gun owners who came out in support of the measure, saying in various ways that they were willing to go through extra hoops to get their guns if it meant saving lives.

While nothing is guaranteed, available research indicates that the new laws will most likely save lives. According to Andrew Morral, the director of RAND’s National Collaborative on Gun Violence Research, magazine bans have been shown to reduce the number of fatal mass shootings. While it is difficult to isolate the effect of a single law, states with stricter gun laws, including permits to purchase firearms, have lower gun homicide and suicide rates, according to Morral in an October interview. Waiting periods to purchase a firearm, which will be implemented as a result of Oregon’s new law, are one of the laws that have been clearly shown to reduce firearm deaths.

This spring, the campaign to pass the measure grew from a small effort based in a Portland church basement to a professionally staffed and nationally funded effort. Following the May shootings in Buffalo and Uvalde, a surge of people decided it was time to change Oregon’s gun laws and set out with clipboards to collect the more than 150,000 signatures required to put the measure before voters.

And, while the transition from a scrappy start to a polished messaging apparatus was difficult, it could be a model for other states to follow, according to Sean Holihan, state legislative director for the Giffords Law Center, which advocates for stricter gun laws and lent its expertise and fundraising power to the Yes on Measure 114 campaign.

“For the most part, when we deal with ballot initiatives, they’re so cumbersome and expensive that we’d rather work for the legislature,” Holihan explained. “However, voters pushed [Measure 114] onto the ballot.” Holihan said he saw examples of voters caring more about stopping gun violence than about party lines this election, even in states like Oregon and Michigan where gun rights are a dearly held value. “I think this does give us some hope,” he said. “Gun violence was top of mind for voters across the state.”

He hopes the results are a message to Republican leaders that they should think twice about what legislation they’re willing to get behind. Oregon political consultant John Horvick, with DHM Research, said the key when crafting a ballot measure is to get as much in there as you can without making it too hard to vote yes. A thin margin of victory, he said, means you didn’t leave anything on the table.

“If you’re an advocate for gun control, you wouldn’t want to pass something with 65%,” he explained, “because maybe there was more control you could get.” Judging by the final tally, there was probably no stricter measure that could have passed. Just enough people said yes and nearly as many said no. But while opinions on guns in Oregon are still sharply split, often on regional lines, the grassroots energy came from all over the state, Pastor Knutson said.

“This is not a victory over anybody,” Knutson said. “We honor those who oppose this  [they’re invited to] work with us to make this one the best, equitable laws for public safety ever.” And, while not directly in response to the liberal pastor from Portland, Donheffner, the hunter from Salem, indicated he was up for the job.

“There are a lot of flaws in the measure,” he said. “I’m sure there will be some who don’t want to fix it; they just want to kill it.” And I appreciate it. But, if you’re going to live with it, you might as well try to fix it if it’s possible.”

Who is Alex Wagner? : Bio, Career, Education, Net Worth, and…