A Russian airbase far behind the frontline in Crimea was damaged by several large explosions that killed at least one person. It wasn’t clear right away if the base was hit by a long-range Ukrainian missile.

Multiple videos on social media showed explosions and clouds coming from the Saky military base in Novofedorivka on the western coast of Crimea on Tuesday afternoon. This made people wonder how a place more than 100 miles (160km) from the frontline could have been attacked. Later, a high-ranking Ukrainian official seemed to say that they were to blame, but didn’t give any details.

Russia’s defence ministry told the RIA Novosti news agency that the explosions took place at about 3.20pm local time, and that “several aviation munitions detonated” in a storage area. It said it was trying to discern the cause of the incident.

Russian tourists holidaying on beaches nearby could be seen leaving in fear. It is one of few occasions that the peninsula, occupied by Russia since 2014, has been directly affected by the latest fighting. Local people told one Russian news site that explosions went on for an hour.

Sergey Aksyonov, the Russian-appointed head of occupied Crimea, said one person had died. Earlier, he had filmed a video statement near the site, with smoke rising in the distance, saying that ambulance crews and medics were on the scene. 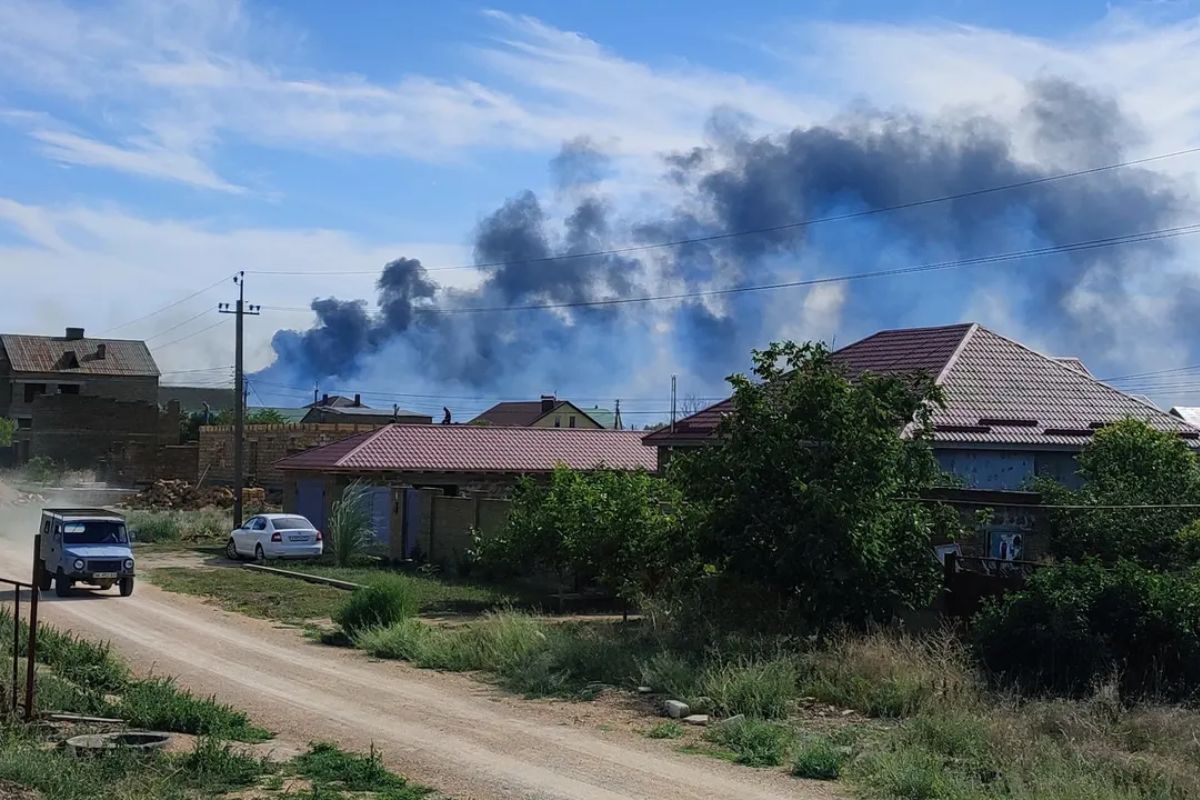 In his nightly address, Ukraine’s President Volodymyr Zelenskiy did not say who was behind the attacks, but he did promise to “liberate” Crimea. He said, “This Russian war against Ukraine and against all of free Europe started in Crimea and must end in Crimea, with its liberation.”

“Our peninsula, which has always been and will always be one of the best places in Europe, is now one of the most dangerous places in Europe because of Russia.” But we will go back to the Crimea in Ukraine. From the Kharkiv region to Kherson, from Donetsk to Enerhodar, from Stanytsia Luhanska to Yalta, and from Berdyansk to Novofedorivka, these are all parts of our country, Ukraine, which will be completely free.

One adviser to the president, Mikhail Podolyak, said Ukraine was not taking responsibility for the explosions, suggesting partisans might have been involved. Asked by the Dozhd online television channel whether Kyiv was taking responsibility, replied: “Of course not. What do we have to do with this?”

Earlier, he appeared to suggest the strike could herald a new phase of the conflict.

Podolyak said that Kyiv’s long-term goal was “demilitarisation of the Russian Federation”. He added: “The future of the Crimea is to be a pearl of the Black Sea, a national park with unique nature and a world resort. Not a military base for terrorists. It is just the beginning.”

Ukraine’s defence ministry said it could not determine the cause of the explosions but added, sardonically, that people should have regard for the rules of fire safety and “the prohibition of smoking in unspecified places”.

In February 1945, Franklin Roosevelt and Winston Churchill landed at the airbase on their way to the Yalta conference. The airbase is too far from the frontline, about 110 miles, for Ukrainian rockets fired from the ground to hit it. It could, however, be reachable by other systems with a longer range.

In the last 24 hours, there have been more and more rumours about Ukraine’s missile capabilities. This is because the US confirmed for the first time that it had given Kyiv long-range anti-radiation missiles, which are used to destroy air defence systems.

A Pentagon spokesperson said on Monday that the US had previously supplied a number of the weapons to Ukraine, but declined to say how many or of what type. The weapons are widely believed to be the AGM-88 high-speed anti-radiation (Harm) missile, a tail fin of which was being circulated by Russian bloggers on Sunday. They are typically launched from a plane and have a maximum range of about 90 miles.

Over the past month, Ukraine has shown that it can use the Himars rocket artillery, which has a range of about 50 miles, to hit deeper and deeper into Russian-held territory.

However, there were other suggestions that the Saky base was hit by a guerrilla operation. Margarita Simonyan, the editor-in-chief of the state-owned Russia Today outlet, appeared to suggest in a tweet that the explosions were caused by sabotage – although she later said the explosion was caused by “several munitions” detonating in storage.

In her later posts, Simonyan said there had been no missile strikes and added that claims Kyiv’s forces could strike 300km (186 miles) were “Ukropropaganda”. She advised people to “exhale and go to the beach”. Other videos, however, showed traffic jams forming as people sought to flee Crimea.

People think that the Saky airbase, which is about 165 miles from the Ukrainian city of Odesa, could have been hit by the same Neptune missiles that were used to destroy the Russian warship Moskva. The anti-ship missiles can hit targets on land and have a range of about 190 miles.

A Ukrainian official, speaking anonymously, told the New York Times that “a device exclusively of Ukrainian manufacture was used” in the attack. That could suggest it was a Neptune, a cruise missile developed by Ukraine and which first became operationally available in the early phases of the war.

Earlier on Tuesday, officials said at least three Ukrainian civilians were killed and 23 were wounded by Russian shelling in 24 hours, including in an attack not far from the Russian-occupied Zaporizhzhia nuclear power plant.

The governor of Dnipropetrovsk region, Valentyn Reznichenko, said that Russian forces firing more than 120 rockets at the town of Nikopol, across the Dnieper River from the plant, damaged several apartment buildings and industrial sites.

The prime ministers of Estonia and Finland have called on fellow European countries to stop issuing tourist visas to Russian citizens, saying they should not be able to take holidays in Europe while the Russian government carries out a war in Ukraine.

Kaja Kallas, the Estonian prime minister, said on Tuesday that “visiting Europe is a privilege, not a human right” and that it was “time to end tourism from Russia now”, a day after a similar appeal from her counterpart in Finland, Sanna Marin.

In an interview with the Washington Post on Monday, Ukraine’s president, Volodymyr Zelenskiy, went even further. He called for a full travel ban and the expulsion of Russians who had moved to the west. Dmitry Peskov, a spokesman for the Kremlin, called the idea “irrational thinking.”