Wednesday, Senate Republicans blocked a bipartisan bill that would have given veterans who were exposed to toxins from burn pits more health care benefits. This was a surprise move that has Democrats and activists furious.

The bill didn’t move forward in the Senate because it didn’t get the 60 votes it needed because 41 Republicans were against it. Senate Majority Leader Chuck Schumer switched from voting “yes” to voting “no” so that he could bring the bill up again in the future.

The bill, known as the PACT Act, represents the most significant extension of healthcare coverage for veterans in years, protecting an estimated 3.5 million former service members who had been exposed to burn pits in war zones. The legislation is projected to cost nearly $280 billion over a decade, according to the Congressional Budget Office.

Russia and Ukraine Share Blame for a Prison Shelling That Killed Scores of Ukrainian Prisoners of War!

In Afghanistan and Iraq, waste was often burned in pits. This exposed military members to toxins that have been linked to a number of lung diseases, illnesses, and cancers.

“It is hard to say why. It seems wrong that 80% of Republicans would vote against our budget “House Speaker Nancy Pelosi said this Thursday at a press conference.

Sen. Jon Tester, a Democrat from Montana who is chairman of the Senate Veterans Affairs Committee and helped write the bill, slammed his Republican colleagues for voting against it and warned that veterans could die because of it. 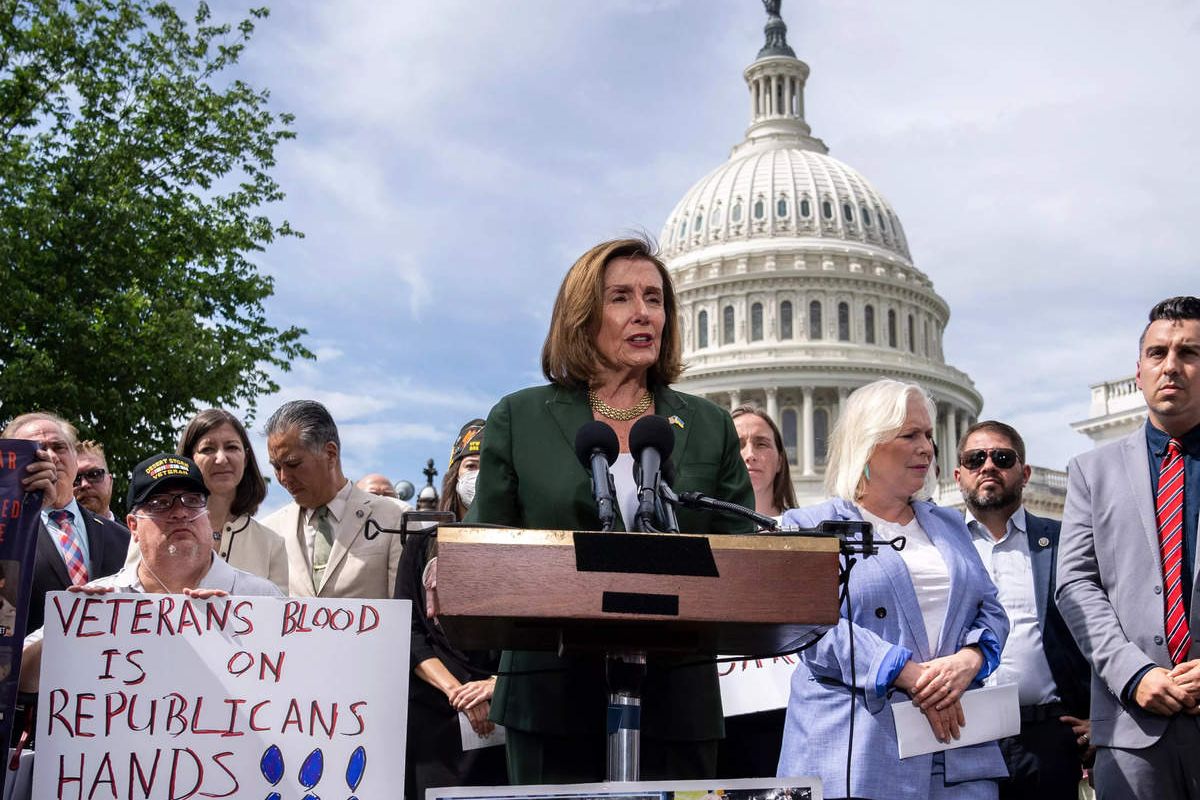 “This eleventh-hour act of cowardice will actively harm this country’s veterans and their families. Republicans chose today to rob generations of toxic-exposed veterans across this country of the health care and benefits they so desperately need—and make no mistake, more veterans will suffer and die as a result,” Tester said in a statement on Wednesday.

On Thursday, comedian Jon Stewart ripped into Republicans on Capitol Hill. Stewart is a supporter of veterans and the people who helped after 9/11.

“They haven’t met a veteran they won’t screw over,” Stewart said.

The bill has a lot of support from Republican senators. It passed the upper chamber last month with a vote of 84 to 14. The bill was then passed by the House by a vote of 342 to 88, but the Senate took it up again on Wednesday after the House version had been changed.

But, unlike the last time, Republicans raised concerns about a part of the bill that deals with spending on Wednesday.

Republican Sen. Pat Toomey of Pennsylvania, who voted against the bill, said that it has a “budget gimmick” that would move $400 billion of spending that is already required by law into the “mandatory spending” category.

“If Congress doesn’t get rid of this trick, they will use an important veterans care bill to hide a huge spending spree that has nothing to do with veterans,” he said in a statement.

Mitch McConnell, the leader of the minority party in the Senate, asked Schumer on Thursday to think about Toomey’s change to the bill.

“As written, the legislation would not just help America’s veterans as designed. It could also allow Democrats to effectively spend the same money twice and enable hundreds of billions in new, unrelated spending on the discretionary side of the federal budget,” McConnell, who voted against the measure, said.

The Senate, which is led by Democrats, thought that the bill would pass a procedural vote on Wednesday. This would move it closer to the final passage and put it on President Joe Biden’s desk for his signature before Congress goes on vacation in August. But right now, the law is in limbo.
“Senator Toomey decides that he wants to rewrite the bill, change the rules, and tank it,” Democratic Sen. Kirsten Gillibrand of New York said during a Thursday press conference. “How he convinced 25 of his colleagues to change their votes — I have no idea. What the hell?”

“This is total bullshit,” she said.

Here are the 41 Republican senators who opposed the bill:

Shakira is Facing an 8-year Prison Sentence in Spain for Tax Evasion!

The Collage Dorm Party That Everyone Will Be Talking About!